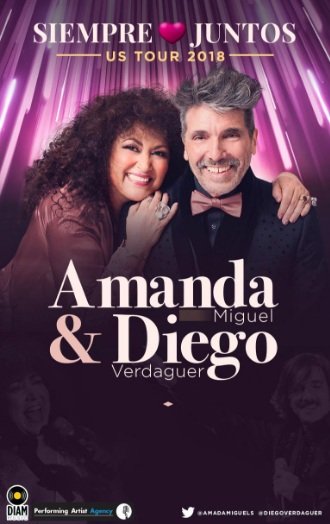 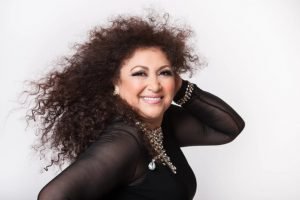 Announce the first leg of a 25 city U.S. Tour 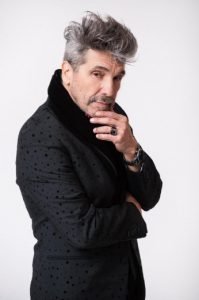 Today, Monday, the first 19 dates and venues of this tour are announced, which is already a guaranteed success.

With an audience that has fervently followed them through several decades, Amanda and Diego have shared the stage on multiple occasions. However, this tour is shaping up as once again share their artistic work as a couple. It is not difficult to imagine that they will captivate the audience again with their contagious energy, vocal abilities, personality, & romance that both distinctively possess in each of their interpretations.

Amanda Miguel – has more than 40 million albums sold worldwide, more than 650,000.000  views on YouTube of her 16 album discography released in the market during her  35-year career – she is considered one of the most representative artists of this century for songs such as: “Él Me Mintió,” “Mi Buen Corazón,” “Hagamos un Trato,” “Donde Brilla el Sol,” “Castillos,” “Como un Títere,” “Cosquillas en el Pecho,” “Dudas,” “Las Pequeñas Cosas,” and “El Gato y Yo” to name only a few.

For his part, Diego Verdaguer – nominated for three Latin ®Grammys with the singles “Volveré,” “El Pasadiscos,” “La Ladrona,”  “Pideme”, “Quien de los dos sera”, y “Voy a conquistarte”among others – the latter in his facet in the Regional Mexican genre. Add to that Diego is the composer of more than 50 popular classics songs, achieving the sale of 20 million records. He has also been accredited with multiple Gold records & earned numerous international awards. Diego has more 260,000 fans on his official YouTube channel with more of 730,000.000 views of his videos, he has also produced more than 20 records, 9 of which are Amanda Miguel’s.

“Siempre Juntos” tour will be full of emotion and dynamism, thanks to the proven talent of Amanda and Diego whose performances always receive standing ovations from their enthusiastic supporters.