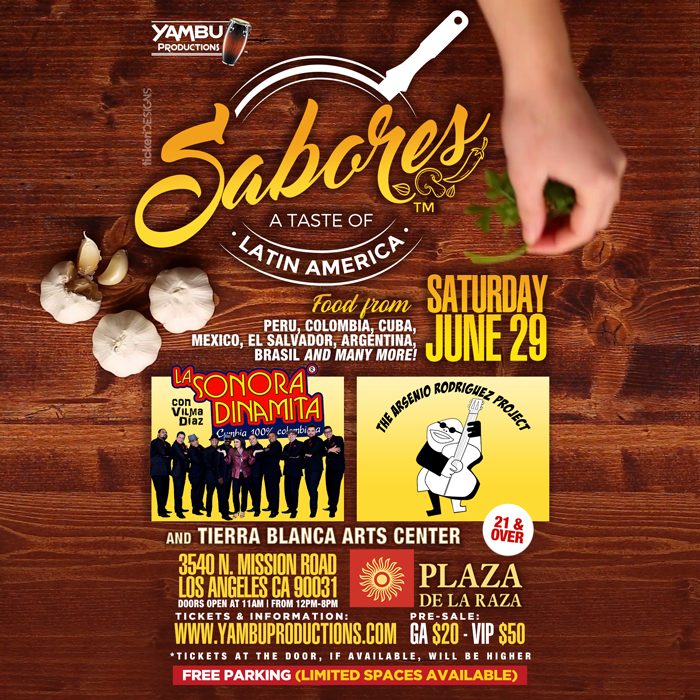 Vesper Public Relations –– May 2019 Los Angeles, CA – The inaugural ‘Sabores, A Taste of Latin America Food Festival,’ will showcase the diverse culture of the Americas through food, drink, art, music, and dance.

Sabores, A Taste of Latin America marks the first time a festival will bring together many cultures in one location, and will highlight Latin culture with music, art, dance and culinary delicacies.  The festival will not only bring the Latin-American community together, but also introduces Angelenos to the vast and rich heritage of the Latin culture.

Sonora Dinamita, from Colombia is one of the first Cumbia groups to reach international success, and is credited with helping to popularize the genre throughout Latin America and the world. The original orchestra was formed in 1960 in Cartagena, Columbia under the direction of bandleader Lucho Argaín. It disbanded in 1963, but was re-formed in 1975 under the direction of Julio Ernesto Estrada “Fruko” Rincón, the artistic director of the Discos Fuentes record label. In 1981, the group released its first successful recordings, including the classic cumbia song “Mi Cucu.” While the group’s lineup has changed, it has always featured a strong female vocalist to accompany its ten-piece brass instrumentation, and currently highlights vocalist Vilma Díaz (La Diva de La Cumbia) who shares vocals with several other male and female vocalist.

The Tierra Blanca Art Center dedicated to bringing the art of music, dance and theater to the greater Los Angeles area. Serving the community since 2003, TBAC was founded under the firm conviction that arts and culture have the power to break down the invisible barriers that often keep our multicultural community from truly living in harmony. Our mission is to instill in our community a sense of pride, identity and unity.

Glorias Cocina Mexicana: Located in Downey, Gloria’s vibrant and festive Mexican restaurant is like taking a vacation for breakfast, lunch or dinner.

Maracas: This Mexican restaurant is an oasis within the oasis of Palm Springs serving both traditional Mexican meals and unique dishes like (red) crema poblano soup, and mango seafood salad.

Paella Mar Catering: Specializing in the dish that travelled across the sea to become a spicy Mexican favorite.

Wess Arepas: It doesn’t get any more Latin American than arepas. The Columbian maize ground dough can be stuffed with any meat, vegetable, and cheese of your liking and is a daily dish in Columbia.

Bianmar Foods: Serving delicious specialty beverages made from scratch that will virtually transport your taste buds to a tropical destination in the Caribbean.

Americas Pupusas: These pupusas are made from scratch with fresh ingredients giving everyone a Salvadorean Cuisine experience.

Tickets can be purchased at the door, or you can buy your tickets in advance online.

Special ‘Open Bar’ $65 all you can drink in designated ‘Spirits Oasis’ area only.

Food and beverages will be available throughout the event. Wristbands will be given at the door to those of legal age for purchase of alcoholic beverages.

For tickets and more information visit: