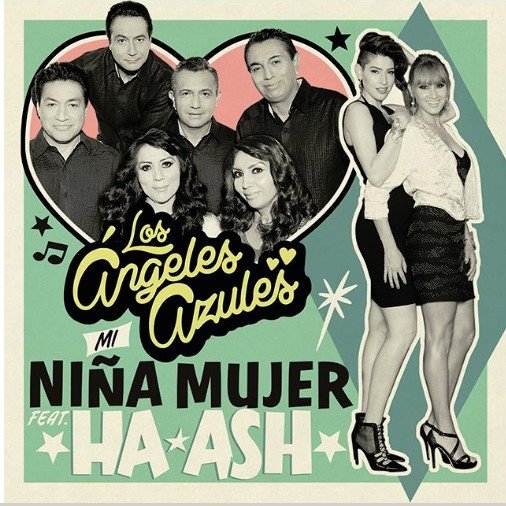 The second single off their new album

**The new album will be released simultaneously in Mexico, USA, Argentina, Chile, Colombia and Peru September 30

After the huge success of the song “La cumbia del Infinito” featuring Natalia Lafourcade along with Rodrigo & Gabriela, which debuted in the top of the digital sales charts including the #1 spot on Mexican Music iTunes, Los Ángeles Azules present “Mi Niña Mujer” featuring Ha*Ash, the second single from their upcoming album De Plaza en Plaza.

This song combines the successful sounds of Cumbia Sinfónica from the Mejía Avante brothers and the romantic style of Ha*Ash, the most important female pop duet in Latin America and US. The result is an excellence example of the amazing musical material that Los Ángeles Azules have prepared for their fans to enjoy September 30 with the release of De Plaza en Plaza.

“This project has given us the enormous satisfaction of establishing ties with our close friends, including Hanna and Ashley, who accompany us with their beautiful voices. Working with them was fun and made everything flow perfectly. We are confident that this song will be a fan favorite,” states Los Ángeles Azules.

“As an artist it’s an incredible feeling when you take your fans out of their comfort zone. We love to combine music and genres, we are not square, or closed minded, so this fusion of cumbia and pop has been wonderful,” said Ha-Ash.

“Mi Niña Mujer” featuring Ha*Ash was produced by Camilo Lara and is co-produced and penned by Jorge Mejia Avante who made the musical arrangements and took care of the artistic & musical direction. The orchestration, symphonic arrangements, orchestral direction and production was overseen by the master Odilon Chavez. Engineer Abelardo Rivera mixed the tracks and assisted in overall production.

The video was recorded last March 17 at the Convent of San Miguel Arcángel, in Mani, Yucatan, Mexico. Diego Alvarez directed the video produced by Miguel Tafich and Sabú Aviles and Etchechoury Gaston the executive producer.

As it has happened with the first two singles from De Plaza en Plaza the rest of the material on Los Ángeles Azules’ the new album will be accompanied by guest of international stature, such as: Pepe Aguilar and Fito Paez among many others. In addition to a wonderful stroll through Yucatan’s scenery.

Los Ángeles Azules released this new single in the midst of an unprecedented success. A few weeks ago the brothers Mejía Avante became the first Mexican artists in 15 years to obtain “Double Diamond” certification for more than 600,000 copies sold of the album Cómo te Voy a Olvidar which remained more than 150 weeks in the Top 20 of AMPROFON.

Other Los Ángeles Azules achievements include:

*After two years on the market, their album Edición de Súper Lujo has never left the Top 100 of the most listened albums on Spotify Mexico.

* They remain in the Top 3 chart of Popular Music AMPROFON.

* They stayed 23 consecutive weeks at number one on the Top 150 of AMPROFON and are still the bestselling album of 2014 and the second bestselling of 2015.

* More than 652 million views of their VEVO channel on YouTube.

* The video for “Mis sentimientos” Feat. Ximena Sariñana has more than 142 million views.

* The tour for Cómo te Voy a Olvidar travelled around Mexico and Central and South America and the United States, offering more than 320 concerts.

* Their impact on Vive Latino, becoming the first tropical music group at the giant music festival, attracting more than 40,000 attendees.

* Their concert in “El Zócalo”, the main square of Mexico City, where they gathered more than 100,000 fans.

The future for Los Ángeles Azules remains bright and 2016 will be one of the best in their career. Besides the impressive achievement of a Double Diamond record, which confirmed them as the most important Mexican group in recent years, they prepare to return stronger than ever with their new album from De Plaza en Plaza and show that their success is not by chance, but the result of talent and hard work.

Los Ángeles Azules return to the stage of the Auditorio Nacional on Oct. 15 with Cumbia Sinfónica and other special guests. Tickets are already on sale through the Ticketmaster system.