Downtown Los Angeles Concert Series, gets to the heart of the emerging LatinX soundscape 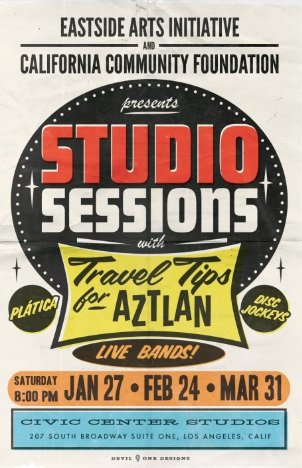 19 Jan Downtown Los Angeles Concert Series, gets to the heart of the emerging LatinX soundscape 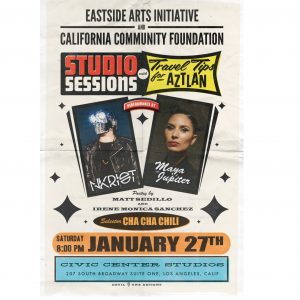 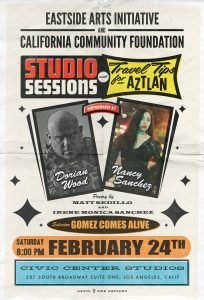 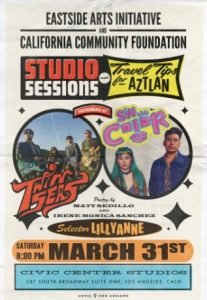 Thanks to a grant from the Eastside Arts Initiative and the California Community Foundation, we are happy to announce three events that will feature the great emerging talent of our East Los Angeles Latino neighborhoods.

Live broadcast from 10pm to 12am on KPFK 90.7FM on Travel Tips for Aztlan hosted by Mark Torres.

NKRIOT (11:10pm) NKRIOT is an electronic music pioneer, inventor, and founder of a new art genre concept called Goji. Formed in the summer of 2013 in the neighborhood of Boyle Heights, California. http://www.nkriot.com/

Poet Matt Sedillo  Born in El Sereno, California in 1981, Matt Sedillo writes from the vantage point of a second generation Chicano born in an era of diminishing opportunities and a crumbling economy.  http://www.mattsedillo.com/

Nancy Sanchez (11:10pm) Nancy Sanchez is a natural musician and artist. Born in Toluca Mexico, then making her home in the United States as a young girl, Nancy Sanchez’ music is a reflection of two cultures. Raised listening to boleros, rancheras and sones, playing Mariachi, and then studied in Jazz as an adult, Nancy is breaking barriers fusing many styles into her songwriting. http://www.nancysanchezmusic.com/ https://nancysanchezmusic.bandcamp.com/

Twin Seas (10:10pm) This East Los Angeles band derives its sounds from the warm beach vibes of sunny California. Blending cheeky 60’s songwriting, the sonic palette of the ’80’s and their own sound, Twin Seas is creating a new platform of music for years to come.  https://www.twinseasmusic.com/

Sin Color (11:10pm) David Aquino and Crisia Regalado are taking the East LA Sound to new Places. This South Los Angeles based band is transforming traditional styles of music into pop soundscapes. Add in Crisia’s operatic voice to Sin Color’s endless exploration of bossa nova, cumbia, and disco filtered through an indie pop lens, and you get a new shimmering movement and dance experience.  https://g.co/kgs/wNhgXo

DJ Lillyanne (8p-12midnight) Native Angelina, co-owner of Headinghome Recordings. She has toured and DJ’d in places like, Berlin, Mexico City, Tokyo.  Musical style influenced by the DJs and producers that paved the way for dance music in the early nineties, along with her own signature sound of west coast house, acid house, disco and minimal techno. https://www.mixcloud.com/djlillyanne/