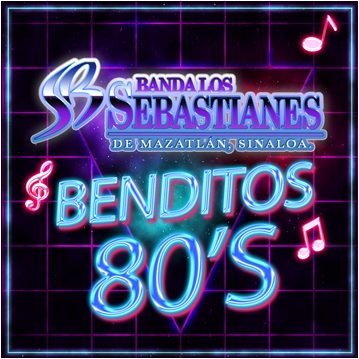 On this album the band pays homage to the songs from one of the most representative eras of pop music that many generations continue to remember today.

With Benditos 80’s, which was recorded at Estudio 21 in the banda’s hometown of Mazatlan, Mexico, Banda Los Sebastianes take us on a musical journey through the best pop and rock music of one of the most iconic decades in terms of fashion, culture, history and art.

BANDA LOS SEBASTIANES has never been afraid to experiment musically, and BENDITOS 80’s is proof of that, introducing timeless songs to younger fans that may have never heard them before.

Originally from Mazatlán, Mexico, Banda Los Sebastianes has become one of the most sought after bandas on both sides of the Mexico/US border.

The history of Banda Los Sebastianes begins in 2012. Since forming, they have released a slew of internationally popular albums featuring award-winning singles such as “A Través Del Vaso”, “Por Si No Recuerdas”, “En Eso No Quedamos”, “Indeleble”, and “Mi Meta Contigo”.

Passion, romance, and a positive attitude are elements that make up the essence of Banda Los Sebastianes, who have demonstrated that through time and experience you can touch the heart of the public.