¡You’re invited to the largest Annual Mexican Gastronomy festival in the United States! 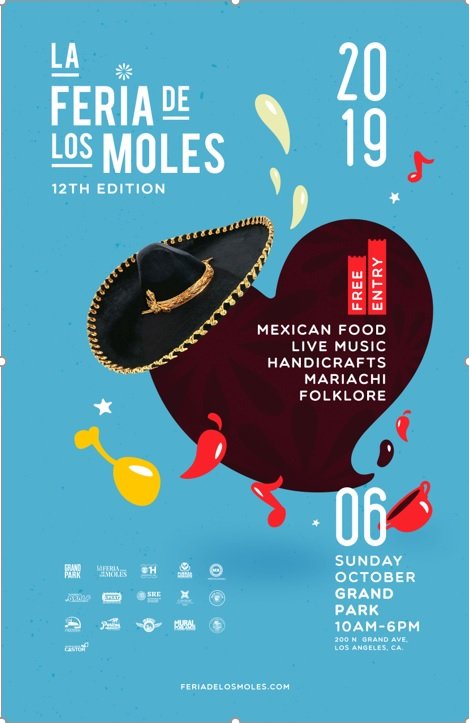 Mole has and continues to be one of the most representative culinary offerings of Mexico since the country’s colonial period. The dish is now a symbol of Mexico’s mixed indigenous and European heritage, both for the types of ingredients it contains, and because of the legends surrounding its origin. Its popularity throughout the world has grown significantly over the past few decades, and La Feria de Los Moles seeks to preserve this tasty tradition for generations to come.

Although many ingredients in the first moles are still present in the dish today, modern mole is a mixture of ingredients from North America, Europe, Africa, and Asia making it one of the first intercontinental dishes created in the Americas. The term mole is most often associated with thick, dark, brownish-red sauces, but it is actually prepared in a variety of textures and colors, from dark and thick to soup-like and bright green, red, yellow and black moles each claiming fans in different regions.

The states of Puebla and Oaxaca are ready to present the best in culinary dishes on Sunday October 6, 2019 in Grand Park: 200 North Grand Avenue, in the heart of Los Angeles at 10:00 am. and lasts until 6:00 pm. Entrance is free and the traditional food is available for purchase.

Last year La Feria de Los Moles received a special recognition from the City of Los Angeles for bringing a quality event to the City that highlights and helps strengthen diversity.

La Feria de Los Moles’ goal is not only to showcase the delicious Mexican cuisine, a tradition- recognized by the UNESCO world patrimony. The fair was founded by Pedro Ramos & Lourdes Juarez  ˜Union de Poblanos En El Exterior (UPEXT), an organization recognized with a Proclamation from the City of Los Angeles recognizing its efforts in support of education, health and issues that affect the Latino community in the city.

Has visited communities from Puebla & throughout Mexico in search of colors, taste and texture that characterize the Mole. In his quest to find the best representation of this succulent culinary he has uncovered rich culture and communities that many times go unnoticed. After this valuable finding, Pedro Ramos sends them to United States with the objective to introduce the rich Mexican gastronomy and be crowned best mole at this 12th Anniversary of foundation La Feria de Los Moles.