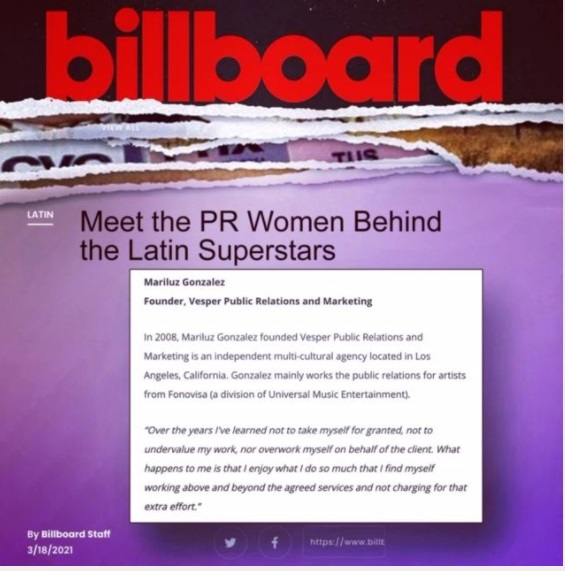 FOR SECOND YEAR IN A ROW

IN “THE PR LADIES BEHIND LATIN SUPERSTARS”

ADDING TO VESPER PUBLIC RELATIONS’  REPUTATION AS THE AGENCY OF RECORD

Vesper Public Relations. Los Ángeles, CA. March 2021 – In celebration of International Women’s Day on March 8, 2021 Billboard compiled a list of the most important publicists in the Latin market and Vesper Public Relations owner Mariluz Gonzalez is among them! The San Fernando Valley raised Latina of Mexican descent was highlighted for her work in the promotion and marketing of Latin music and entertainment.

Mariluz was asked what she, as a woman and as owner of her own independent multi-cultural PR agency, has learned over more than a decade of promoting Latin music.

“Over the years I’ve learned not to take myself for granted, not to undervalue my work,” said the woman responsible for media campaigns of many Fonovisa recording artists (the Regional Mexican powerhouse a division of Universal Music Entertainment) based in Hollywood.

This is the second year in a row that the Vesper PR owner was recognized in Billboard’s “The PR Ladies Behind Latin Superstars,” an article celebrating Women’s History Month. Mariluz’ recognition in Billboard last year was one of many great achievements during a trying and heartbreaking 2020. Mariluz Gonzalez expects the Billboard recognition to once again herald a prosperous year for Vesper Public Relations.

Last year, the beginning of our new normal, brought new clients to Vesper Public Relations, clients such as Primestore Development which sought out Vesper PR to spread news of the company’s efforts to keep patrons of their shopping centers safe during the early days of the pandemic.

2020 was the year of closures, cancelations, and reimagining of events. Vesper PR not only announced the Hola Mexico Virtual Theater in May, but also coordinated national media coverage for the official 2020 Hola Mexico Film Festival streaming on Pantaya network during Hispanic Heritage Month.

Speaking of Hispanic Heritage Month, Vesper Public Relations was called upon by Los Angeles City Councilwoman Monica Rodriguez who is responsible for organizing the City’s multicultural events. Councilwoman Rodriguez brought on Vesper PR to coordinate media coverage of both the 2020 virtual “El Grito” celebration and the 2020 virtual “Dia de los Muertos” drive through experience. The “Dia de los Muertos” event was extra special last year as the holiday altar covered the entire facade of Pacoima’s city hall building with photos of loved ones lost to the COVID-19 pandemic.

Proving that Vesper PR is the go to firm for all things Latinx, media outlets looking for quotes on Latin culture continue to interview Vesper PR founder Mariluz Gonzalez for her unique insight. Most recently she was featured in ShoutOut LA, The Queso Podcast and on Beond TV.

Says Mariluz Gonzalez founder and owner of Vesper PR, “2020 was scary for all of us, devastating for many of us, but no matter how terrible things get we still have responsibilities, we still have people depending on us and that is why we work. There will be great losses in life, but there will also be little victories that push us onward. Here is to those small victories.”

Vesper Public Relations & Marketing was founded by Mariluz Gonzalez, who after graduating with a B.A in Latin American Studies from UCLA, began working in public relations with well-established entertainment labels. However, her love of Latino Arts & Culture and entrepreneurial spirit led her to successfully launch Vesper Public Relations & Marketing in 2008. Mariluz Gonzalez is also a long-time co-host of KPFK’s long-running Latin Alternative music show, Travel Tips for Aztlan, bringing a deeper level of entertainment expertise to her clients.

Vesper PR’s extensive knowledge in the diverse, contemporary Latino culture and the team’s reputable relationships with various media producers and other cultural influencers differentiates the agency as true specialists in the industry.

Vesper PR is known for building profitable alliances between promoters and organizations, brands and events. Embracing an avant-garde vision, Vesper PR seeks out and utilize all avenues of promotion be it traditional or alternative in order to remain as innovative and fresh as their clients.

Both Vesper Public Relations and Mariluz Gonzalez have been recognized by the City of Los Angeles for their work in deepening the cultural presence of artists in the city. Recently, Mariluz was honored amongst 31 other women from the San Fernando Valley by the popular blog; I am San Fernando, for their contribution to their community.