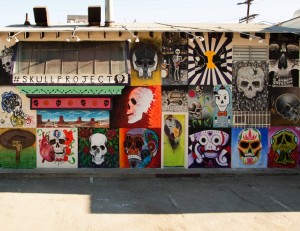 Brings the Skull Project to life to YXTA & Mercado Restaurants

Month-long residency at Sepulveda House at Olvera Street in February 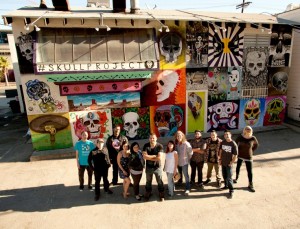 Beginning early February to early March, you can stop by the “América Tropical” historic mural and visit Carlos Nieto III’s temporary studio on the second floor; a befitting location as, much like Carlos Nieto III’s creative projects, the famous “America Tropical” mural went undetected until it was quietly brought to life to make an impact on art lovers.

You can stop by the “America Tropical” mural and visit his temporary studio on the second floor from mid-February to early March, Fridays through Sundays from 10:00AM – 3:00PM. 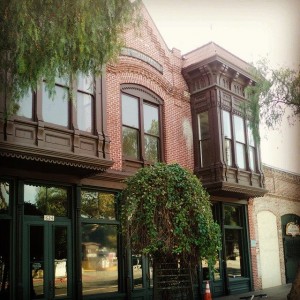 Also catch him in action during his month-long residency at the Sepulveda House on Olvera Street where he will be painting the panels.

“The Skull Project” is another hidden gem that has been recently gifted to Los Angeles. It’s an idea that restaurant owner Jesse Gomez had when opening his third Mercado restaurant along the Cahuenga corridor just outside of Universal Studios. He envisioned a wall full of skulls, each one created in a different style by a different L.A. artist. Carlos Nieto III (CNIII) was a natural collaborator to bring the project full circle.

The two have been collaborating on creative concepts since 2011, when Jesse visited one of Carlos ‘first” Día De Los Muertos” themed art shows at a now defunct staple coffee shop in Silverlake called The Coffee Table. Since then, Carlos has infused his art into Jesse’s flagship restaurant YXTA in DTLA as well as his 3 Mercado locations.

While working on the inside murals at Mercado Hollywood, Jesse approached Carlos about his Skull project and Carlos got to work on it, hand selecting artists he has worked with in the past. The project took a little over a month and is truly a collaborative masterpiece, joining skulls of all styles from abstract to realistic, cartoon and comic book to street art and even a mosaic tiled skulls.

Like all good subtle gems, there’s a catch to viewing its beauty: you won’t see it out on the public street, it yearns to be discovered by unsuspecting patrons of the restaurant who happen to pass by the back parking lot, and, further down the line, to those who will travel to the location specifically to see and appreciate this work of art first hand.

Carlos is continually working on a creative endeavor; from the DTLA artwork to curating pop-up art shows to doing Anime drawing workshops at SoCal libraries. He is currently taking part in a major beautification project at Thomas Starr King Jr. High School in Silverlake. He has designed two 4×8 foot panels that will be attached to the school’s outer fence along with others painted by LA artists including street art icon, Shepard Fairey. 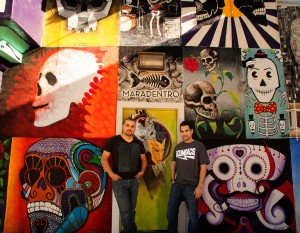 Follow CNIII on Instagram @cnieto111 and get in on his weekly art scavenger hunt where you can find free original CNIII art!