The “Pavarotti of Salsa” 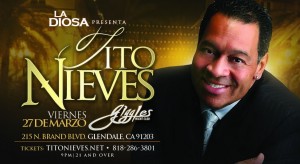 Vesper Public Relations. Los Angeles, California. March, 2015 – Tito Nieves “the Pavarotti of Salsa” returns to the Southern California stage to delight fans with a unique stellar performance in the city of Glendale.

His vast list of hit songs include” Can You Stop the Rain”, “You Bring Me Joy”, “De Mi Enamorate”, “Fabricando Fantasías”, “Sonámbulo”, and “Señora Ley”, but the song that broke records and threw stardom his way was “I Like it Like That”.

What:    Tito Nieves “the Pavarotti of Salsa” in Concert

Tickets are already on sale at www.titonieves.net

During his extraordinary career that began at age 15 in the early 70’s, Tito Nieves has earned three gold albums, the first for the album “Classic” which includes the song Sonámbulo. Certainly what led him to stardom was the performance of “I’ll Always Love You” which became the first salsa song in English to reach the top spot in the Puerto Rican and U.S. charts.

While traveling the road to fame Nieves met other great salseros as Celia Cruz, Tito Puente, Johnny Pacheco and Héctor Lavoe, who all had great influence on his career.