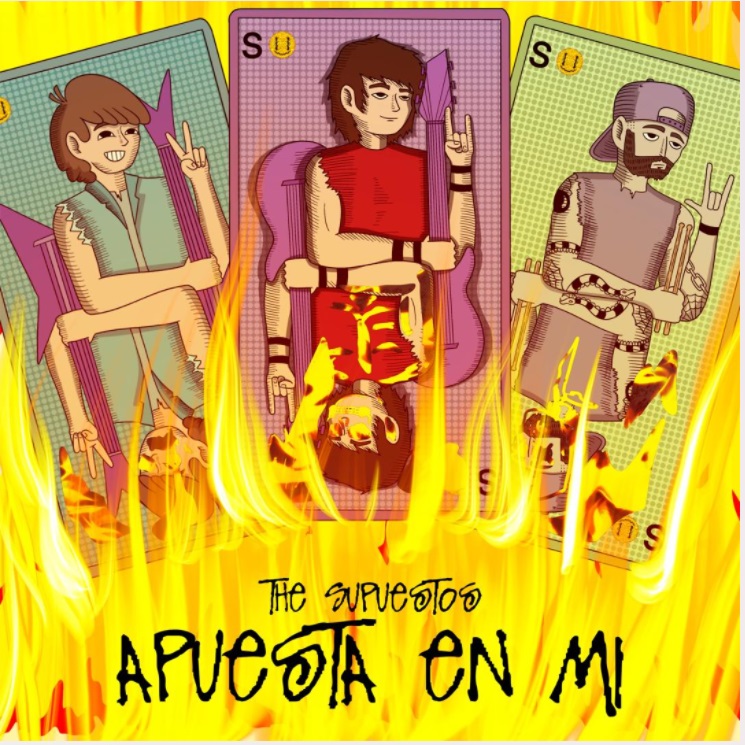 CONTINUE FUSING ANIMATION, MUSIC & REALITY WITH THE RELEASE OF THEIR SECOND SINGLE & VIDEO

An animated video inspired by love lost during the pandemic

Featuring energetic guitar riffs and heart-pounding drum lines, the song takes listeners on a musical roller coaster ride while the video immerses viewers deeper into the vibrant, animated world of The Supuestos, with the band being trapped by the same group of aliens that captured the woman in their first video. It also depicts a fight against a succubus-like demon inside a casino and other out of this world imagery.

The single’s lyrics explore the themes of love and relationships, emphasizing how we occasionally need to take chances. Founder Kenio Chavero comments, “I once had a girlfriend how was scared to take our relationship to the next level. My feelings of longing for her to take a bet on me came out while writing the song.”

Chihuahua based The Supuestos was born during the COVID-19 pandemic and includes members of the Mexican punk band SEIS PISTOS. With no venues to perform live, Kenio, Yorsh and el Shinobi found refuge by rehearsing and recording, giving birth to The Supuestos. The new band is driven by two universal powers: rock ‘n’ roll and love. These two pillars serve as both emotional and artistic sustenance for the members as they continue developing their sound.

Their first single, “No Me Digas Adiós”, is a fast-paced, headbanging song that reflect upon the difficulty of ending a relationship and is accompanied by a colorful animated video by the illustrator Manuel Fermont and Sergio Jaso featuring aliens, milkshakes, skateboards and a re-kindled romance. Tight guitar lines and drum rhythms sustain the drive from start to end.

“No Me Digas Adiós” – Music Video

Music, animation & virtual reality are equally important for The Supuestos. The band’s goal is to immerse listeners and viewers in a cartoon-like world with a wild and fun soundtrack. Each of their videos are chapters of a longer story.

For more information about THE SUPUESTOS: