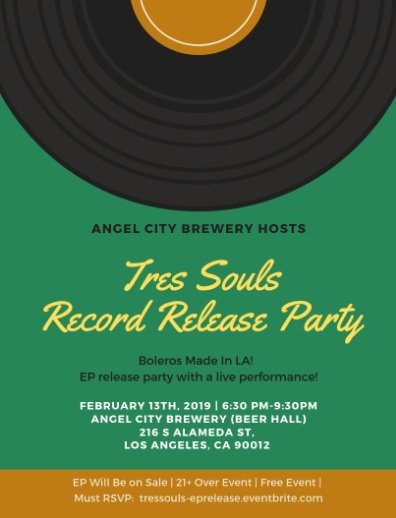 Vesper Public Relations. Los Angeles January 2019. The Los Angeles-based trio romántico Tres Souls are gearing up to release “La Luna Eres Tu”, the first single off their debut, self-titled EP “Boleros Made in L.A.” Dedicated towards reviving and preserving the vintage sounds and songs of the 1940s -1960s bolero style, which originated in Cuba and has since spread throughout Mexico, Latin America and the rest of the world, the three L.A. natives are an integral part of a new generation of immigrants/Mexican-American artists from Los Angeles that are re-creating boleros in a modern context. 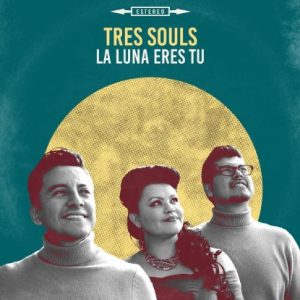 “La Luna Eres Tu” is a sonic collage of the classic bolero genre with sound clips from Maria Candelaria (1943), a movie from the Golden Age of Mexican cinema. Its sultry lyrics, sung by lead vocalist Rocio Mendoza, are inspired by the conscious rapper Talib Kweli’s song “Beautiful” – “I can’t ignore your aura cuz’ it grabbed me by the hand, like the moon pulled the tide, and the tide pulled the sand.” The single is as a metaphor of how the moon attracts the ocean in the same way love attracts you to your significant other. It is a tender and a soulful declaration of affection with intricate guitar play. Although Tres Souls maintain the essence of bolero music with “La Luna Eres Tu”, the romantic trio adds a contemporary touch with electric guitars, keyboards, and samples.

For about a year, Tres Souls have been writing songs and working on creative content for their debut EP, which pays homage to boleros, and trios románticos, and is set for release in February 2019. They have created original songs as well as rearranged classic boleros from Mexico and other Latin American countries. Together, they have crafted an EP that is authentic and innovative, which includes collaborations with several Los Angeles-based guest artists that specialize in the bolero genre.

Tres Souls are grateful that the Los Angeles and Southern California communities have opened their doors to them and allowed them to be a part of their family and celebrations throughout the years, and they are extremely excited to share their new recordings with the public. They are continuing the generational stories of their cultures through traditional Mexican music, specifically boleros, and the three musicians have dedicated themselves to creating a classic sounding EP while maintaining an authenticity to which they are as individuals and as musicians. Their mission is to stay true to the genre, while making their own arrangements and branching out in ways that make sense to a particular song or story.

The EP has been funded in part through a Kickstarter campaign, whose contributions have gone towards mixing, mastering, CD artwork and printing, PR, a music video, CD release events, paying supporting musicians, and helping them support their tours. Tres Souls have continually released videos and additional content on their social media during the campaign to keep everyone updated on their progress.

The genre of Boleros originated in Cuba then it made its way into Mexico in the 1940s. Three-piece bands were known to perform this style of music and now we have a new generation of artists. Tres Souls is a modern romantic trio made up of Jesus Martinez (Requinto), Rocio Mendoza (Lead Vocals), and Roberto Carlos (Rhythm Guitar).  The ensemble represents a revival of traditional trios, inspired by the Golden Era of Mexican cinema. Based out of Los Angeles, they have been performing together for seven years, and their mission is to help preserve the genre of bolero music in Los Angeles, and if possible, broaden their audience to more willing listeners in other parts of the globe. They are part of a new generation of artists dedicated to the revival of trio romántico music in today’s era.

Tres Souls have performed all over the greater Los Angeles area. Their past performances include The Broad Stage’s original cultural educational musical called “Musical Explorers”, AIRBNB’s Open Spotlight, MOLAA, Metro Arts Presents at Union Station, Plaza De Cultura Y Artes, Rosenthal Theater, Casa 0101, KPFK, KXLU, Walt Disney Studios for the premier of Coco the movie and most recently at Music Center’s 59th Holiday Celebration a very special event that provides Angelinos of all ages an opportunity to come together during the holidays to experience and honor the dynamic, rich cultures of the County.