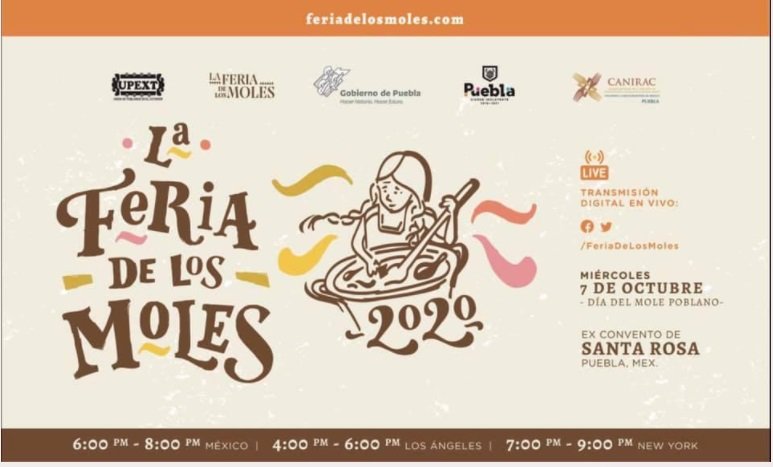 For the first time since its founding 13 years ago, the Feria de los Moles will be hosted in the city of Puebla, Mexico in 2020.

Vesper Public Relations. Los Angeles CA October 2020. A workshop and tasting will take place at the Museo de Santa Rosa, strictly adhering to all sanitary precautions. This coming October 7th, the city of Puebla will celebrate the state and city holiday honoring mole poblano with the Feria de Los Moles 2020, a gastronomic festival that for the past 12 consecutive years has been held in Los Angeles, California and has been organized by the Unión de Poblanos en el Exterior (UPEXT).

For the 13th edition of the Feria de los Moles, the Secretary of Municipal Tourism of the City of Puebla is lending a helping hand to assure that the festival can successfully happen for the first time in the city of Puebla. Puebla also happens to be one of the birthplaces of mole, a dish that is officially recognized as a Mexican National Patrimony.

The Feria de los Moles 2020 will take place in the Museo de Arte Popular Ex-Convento de Santa Rosa, the birthplace of the dish. The festival will have a limited number of attendees but will still honor the dish’s significance, offering a workshop and tastings to a small group of participants.

Mole has and continues to be one of the most representative culinary offerings of Mexico since the country’s colonial period. The dish is now a symbol of Mexico’s mixed indigenous and European heritage, both for the types of ingredients it contains and because of the legends surrounding its origin. Its popularity throughout the world has grown significantly over the past few decades, and La Feria de Los Moles seeks to preserve this tasty tradition for generations to come.

Although many ingredients in the first moles are still present in the dish today, modern mole is a mixture of ingredients from North America, Europe, Africa, and Asia, making it one of the first intercontinental dishes created in the Americas. The term mole is most often associated with thick, dark, brownish-red sauces, but it is actually prepared in a variety of textures and colors, from dark and thick to soup-like and bright green, red, yellow and black moles each claiming fans in different regions.

Mónica Prida Coppe, the current Secretary of Municipal Tourism for the city of Puebla, urges all poblanos to celebrate this day by preparing mole at home or by ordering from a restaurant or market. She adds that the purpose of celebrating mole poblano is to promote its identity and history, as well as to promote gastronomic tourism.

Pedro Ramos Martínez, founder of the Feria de los Moles, is proud to say  that the event has been happening in downtown Los Angeles since 2007 and is considered the biggest Hispanic gastronomic festival in the United States.

In its previous edition in 2019, the Feria de los Moles succeeded in gathering more than fifty thousand attendees during just one day to try different kinds of mole from the Mexican states of Puebla, Oaxaca, Tlaxcala and Guerrero.

This year’s edition  of Feria de los Moles the following dignitaries will be present Vanessa Barahona and Sergio Vergara, the Secretaries of Tourism and Culture of the Government of the State of Puebla, in addition to Martha Ornelas, the Manager for Tourism, Art, and Culture for the City of Puebla.