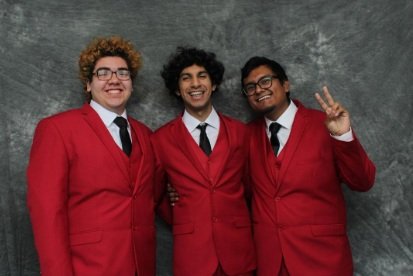 ‘For Today, For Tomorrow, For What Is, For What Could’ve Been’

After electrifying shows at Viva Pomona and Tropicalia Festival, the three-piece band is set to perform at the iconic El Rey Theatre on Saturday, October 27

Vesper Public Relations. Los Angeles September 2018. The San Gabriel Valley ( El Monte) garage rock trio The Red Pairs continue taking their raw sound to bigger festival stages and venues after releasing their second full-length album, For Today, For Tomorrow, For What Is, For What Could’ve Been.

This year has seen the group perform at Viva Pomona, a festival that has a knack for predicting Southern California-based artists who will break out in the near future. The Red Pears are now gearing up for a headlining performance at Los Angeles’ historic El Rey Theatre on Saturday, October 27. In the meantime, the group continues garnering a loyal fan base via their powerful live shows and their melodic, lo-fi-style recordings.

Click here to listen to For Today, For Tomorrow, For What Is, For What Could’ve Been

The Red Pears formed in 2014 in El Monte, CA by Henry Vargas (guitar and vocals) and Jose Corona (drums). They started as a duo, with their first gig together being an open mic at a church. After the release of their first full length EP We Bring Anything to the Table… Except Tables, We Can’t Bring Tables to the Table, the group garnered unexpected attention from both critics and new fans. Bassist Patrick Juarez soon after joined the group, and they started performing at backyard shows all around El Monte. Eventually, through mutual friends, they would end up playing throughout the Inland Empire region with bands like the Beach Bums and The Cozzmos.

After slowly building their fan base over a few years, they landed a slot at the eclectic (and completely sold out) Tropicalia Festival late last year at the Queen Mary in Long Beach, CA alongside headliners Los Tigres Del Norte, Chicano Batman, and Kali Uchis. With influences ranging from The Kinks and Joe Jackson to The Strokes and The Arctic Monkeys, the band’s upward trajectory is seen as inconceivable for any young, Latino musicians coming out of the San Gabriel Valley region.

*Opening for The Marías