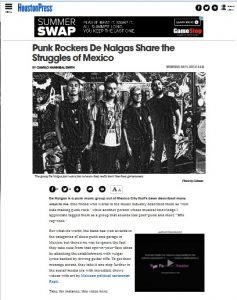 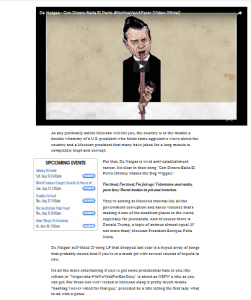 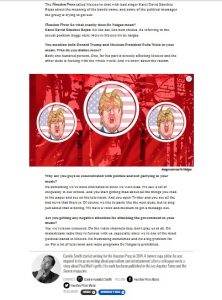 De Nalgas is a punk music group out of Mexico City that’s been described many ways to me. One friend who works in the music industry described them as “rich kids making punk rock,” while another person whose musical knowledge I appreciate tagged them as a group that sounds less post-punk and more “’90s rap-rock.”

For what it’s worth, the band has won awards in the categories of disco punk and garage in Mexico, but there’s no way to ignore the fact they take cues from that spit-in-your-face ethos by attacking the establishment with vulgar lyrics backed by driving guitar riffs. To get their message across, they take it one step further in the social-media era with incredible chewy videos with art by Mexican political cartoonist Rapé.

Take, for instance, this video here:

As any politically astute Mexican will tell you, the country is in the middle a double whammy of a U.S. president who holds some aggressive views about the country and a Mexican president that many have joked for a long minute is completely inept and corrupt.

They’re aiming at Mexico’s internal ills, all the government corruption and narco violence that’s making it one of the deadliest places in the world, especially for journalists. And of course there is Donald Trump, a topic of animus almost equal (if not more than) Mexican President Enrique Peña Nieto.

De Nalgas’ self-titled 12-song LP that dropped last year is a hyped array of songs that probably sound best if you’re in a mosh pit with several rounds of tequila in you.

It’s all the more entertaining if you’ve got some presidential hate in you; the refrain in “Vergaviota #YoNoVotéPorEseGüey” is about as NSFW a title as you can get. For those not well-versed in Mexican slang it pretty much means “hashtag I never voted for that guy,” preceded by a title telling the first lady what to do with a penis.

The Houston Press called Mexico to chat with lead singer Karel David Sánchez Rojas about the meaning of the band’s name, and some of the political messages the group is trying to get out.

You mention both Donald Trump and Mexican President Peña Nieto in your music. Who do you dislike more?
Both; one hundred percent. One, for his part is directly affecting Mexico and the other dude is fucking with the whole world. And we know about the racism.

Why are you guys so concentrated with politics and not partying in your music?
It’s something we’ve been interested in since we were kids. We saw a lot of inequality in our school. And you start getting mad about all the things you read in the paper and see on the television. And you open Twitter and you see all the bad news that there is. Of course we like to party like the next dude, but to sing just about that is boring. We have a voice and medium to get a message out.

Are you getting any negative attention for attacking the government in your music?
Yes, we’ve been censured. On the video channels they don’t play us at all. On mainstream radio they’re furious with us, especially since we’re one of the most political bands in Mexico. It’s frustrating sometimes and it’s a big problem for us. For a lot of television and radio programs De Nalgas is prohibited.