Save The Date: MOLAA: Perez Prado: The Original Mambo King 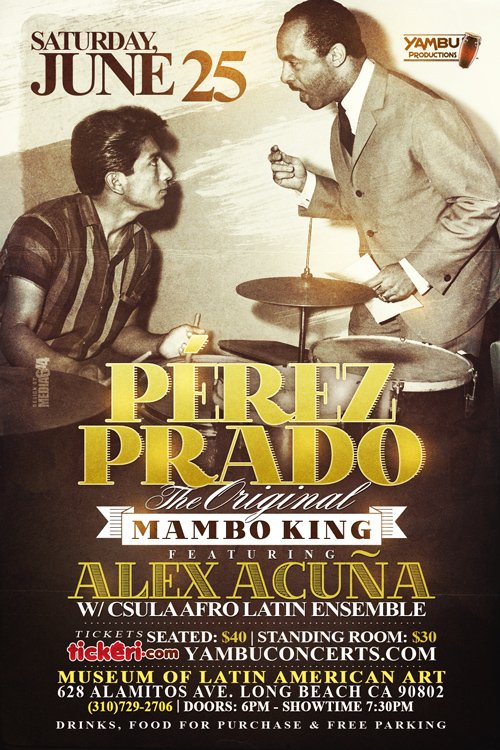 12 May Save The Date: MOLAA: Perez Prado: The Original Mambo King

Posted at 07:20h in Client, Events, Media, Music by Jackie Serrano 0 Comments
0 Likes
Share
SUMMER CONCERT SERIES IS BACK AT
THE MUSEUM
OF LATIN AMERICAN ART (MOLAA) IN LONG BEACHGREATEST LATIN SOUNDS RETURNS
TO SOUTHERN CALIFORNIA FOR A NEW SEASONKicking off the series Saturday, June 25, 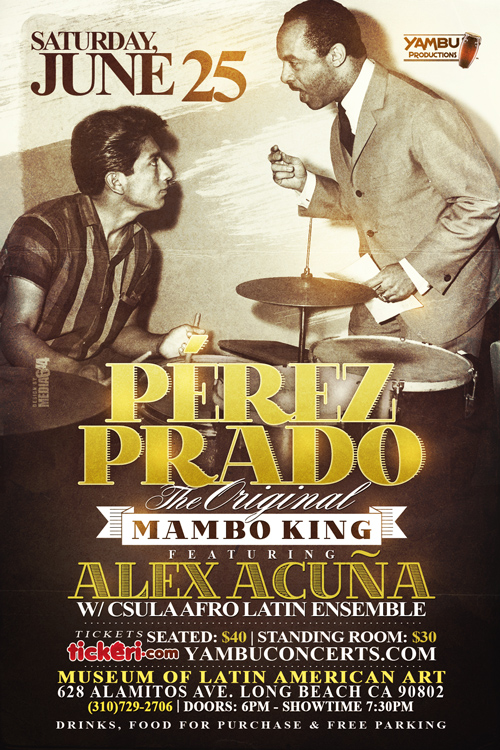 Following the success of the last three years, Yambu Productions will offer a series of live performances at MOLAA featuring contemporary artists, each celebrated and recognized for their contributions to the preservation of the traditional sounds of Latin American music.

The first concert will be held on Saturday, June 25 when CSULA Afro Latin Ensemble featuring master percussionist Alex Acuña will pay a tribute to the music legacy of the original Mambo King, Damaso Perez Prado.

Saturday, June 25
Perez Prado: The Original Mambo King featuring Alex Acuña with CSULA Afro-Latin Ensemble
Considered by critics and fans around the world to be the original “Mambo King,” Perez Prado was one the most influential pop orchestra leaders of the early 1950’s.  This year, Cal State University Los Angeles Afro Latin Ensemble, under the musical direction of Dr. Paul De Castro will evoke the nostalgia of that important era. The ensemble will feature as a special guest, Peruvian-born master percussionist, Alex Acuña. Acuña as a teenager became one of Peru’s most accomplished session drummers, playing on many recording projects, as well as, film and television productions.  Alex Acuña also earned a reputation for his outstanding live performances. So much so, that by the age of 17 he moved to the US when the great band leader, Perez Prado, asked him to join his band.

Food and drinks will be available for purchase.

Ticket Information:
Seated: $40 | Standing Room Only, $30.
***Ticket prices at the door, if available will be higher