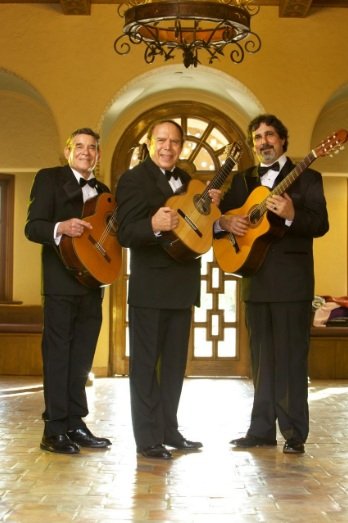 Musical and cultural experiences in an effort to preserve, uplift, and celebrate Latin American bolero music history in Los Angeles 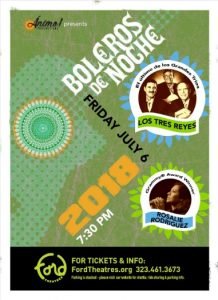 Reserved seating. Tickets are available at FordTheatres.org or 323-461-3673 (for non-visual media 323-GO-1-FORD). To learn about discounts for groups of 10 or more, please visit FordTheatres.org.

Curated by its founder Roberto Carlos, a young Los Angeles-based artist/promotor who has committed his musical journey to bolero music and its traditions, this new music series will feature the last of the great romantic trios Los Tres Reyes, along with GRAMMY®-winner Rosalie Rodriguez. Evoking the bohemian spirit of LA, this magical summer evening under the stars will be filled with nostalgia and love.

Raul Puente. They were noted not only for their guitar virtuosity, but also for their contributions to the development of the romantic music genre in Mexico during the 1950s and 1960s. They are

considered icons of Mexico’s popular music. The group has toured extensively in the United States, Europe,

and Latin America. The group is made up of brothers Gilberto and Raul Puente from Nuevo Laredo Tamaulipas, México and the Matanzas, Cuban-born singer/guitarist Bebo Cardenas.

GRAMMY® award-winning recording artist Rosalie Rodriguez was born and raised in the heart of central California, the San Joaquin Valley. She is a third generation mariachi musician and made her way to Los Angeles after high school to pursue a career in the performing arts. Rosalie landed a recording contract with Sony Music Latin after attending Berklee College of Music. Rosalie’s career highlights include performing at the Houston Astrodome and Teatro Degollado in Guadalajara, Mexico.

Rosalie has made appearances on shows such as Gordon Ramsey’s Hell’s Kitchen, My Fair Wedding with David Tutera and Jaime Oliver’s Food Revolution, as well as in films and national commercials with celebrities such as Mexican comedian Adal Ramones and American Idol judge Randy Jackson. Rosalie has also shared the stage with performers such as Linda Ronstandt, Pedro Fernandez, Marco Antonio Solis, Vicki Carr, and Cristian Castro to name a few.

The John Anson Ford Theatres are owned by the County of Los Angeles and operated in partnership with the Department of Parks & Recreation and the Ford Theatre Foundation. Situated in a 32-acre regional park in the Cahuenga Pass, the Ford Theatres complex is one of the oldest performing arts venues in Los Angeles still in use. This event is part of the Ford Theatres 2018 Season, an eclectic series of music, dance, theatre, film and family events that represent the diversity of the region. Ford programs nurture artists, arts organizations and audiences through initiatives designed to encourage participation in the arts.

The Ford is located off the 101 Hollywood Freeway at 2580 Cahuenga Blvd. East, Hollywood, CA 90068, between Hollywood and Universal Studios in the Cahuenga Pass. Grounds open two hours before show time for picnicking. In addition to a variety of food and beverages available on site, patrons are welcome to bring their own food and drink (wine and beer are allowed). The Ford is disabled accessible. Portable wireless listening devices are available upon request. The Ford Theatres is a smoke free facility.

Onsite parking at the Ford is limited and stacked. $12 per vehicle, cash only. Carpool and save: three or more people per vehicle pay only $7 for parking for evening shows. A FREE shuttle to the Ford services the Universal City/Studio City Metro Station at Lankershim Blvd. and Campo de Cahuenga (excluding Big World Fun and JAM Sessions). The Ford shuttle stops in the “kiss and ride” area and cycles every 20 minutes. For non-stacked off-site parking, a FREE shuttle services the parking structure located at 3330 Cahuenga Blvd. West, Los Angeles, CA 90068; parking costs $12, cash only.

A complete season schedule, onsite dining options, directions, and parking information can be found at FordTheatres.org.