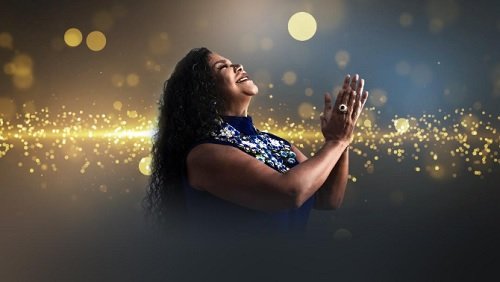 Los Angeles, CA. (March 2020) – Eva Ayllón, the “Queen of Afro-Peruvian Soul”, is ready to embark on her 50th Anniversary North American Tour. After recently being awarded a Lifetime Achievement Award at the 20th Annual Latin Grammy award ceremony, the distinguished Peruvian artist is excited to return to the U.S. and to Canada with a full band to celebrate the milestone achievement of bringing Afro-Peruvian music to audiences throughout the world for five decades.

With a recording career that spans over thirty albums, Eva Ayllón is widely regarded as one of the foremost Afro-Peruvian musicians of all time. Her repertoire of Afro-Peruvian music, also known as Peruvian música criolla, ranges from romantic, Spanish-influenced valses of coastal Peru to the rhythmic landó, and festejo, genres traced to Africa that made their way to Peruvian haciendas via the slave trade.

During the tour, Ayllón will be performing iconic songs from throughout her fifty-year career, including “Me Sabe a Canela,” “Mal Paso,” “Saca Las Manos,” and “Toro Mata.”

The 26-date transcontinental tour begins on April 23 in West Palm Beach, FL and ends on May 31 in Los Angeles, CA. For more info/tickets, please visit evaayllon2020.com.

Eva Ayllón is one of the most celebrated voices of the Afro-Peruvian tradition. She was born María Angélica Ayllón Urbina in 1956 in Lima, Peru and started her singing career at the early age of three under her grandmother’s tutelage. From 1973 to 1975, she performed and recorded with the trio Los Kipus, and in 1978, she debuted as a soloist with the release of Esta Noche. She began touring internationally soon after in Europe, North America, and Asia. In 1989, she sang in Los Hijos del Sol, a group comprised of all-star Peruvian musicians including master drummer Alex Acuña. Her inclusion in Afro​-​Peruvian Classics: The Soul of Black Peru, a compilation of Afro-Peruvian music distributed by David Byrne’s Luaka Bop label in 1995, brought her international attention. In her 2002 live album 30 Años en Vivo, which she presented before 30,000 adoring fans in Lima, she achieved double platinum status. She received a Latin Grammy nomination for Eva in 2003, and her 2009 album Kimba Fá gained a Latin Grammy nomination for Best Folkloric Album. Her most recent albums include Como la Primera Vez and Un Bolero un Vals, a tribute to her parents and her grandmother.

Ayllón remains best known for her renditions of Afro-Peruvian music, a family of styles that began to gain popularity in the 1950s, hand in hand with the notion of “black pride.” One such style of Afro-Peruvian music is the landó, which developed from an African dance and features call and response vocals. Ayllón mastered the form and became known as “the queen of the landó“. In addition to the landó, Eva is known for her live performances and recordings of other traditional styles, including the festejo and the vals: all fusions of Peru’s Andean, African, and Spanish heritage.

The Washington Post writes, “Peruvian singer Eva Ayllón is a diva, but she’s also a folkloric artist with a message about race, class and self-esteem.”

Most recently, Ayllón was awarded a Lifetime Achievement Award at the 20th anniversary Latin Grammy award ceremony in November 2019. The Lifetime Achievement Award is presented to performers who have made contributions of outstanding artistic significance to Latin music. She has also served as a coach for La Voz Perú and La Voz Kids, and she continues to tour and expand her recording repertoire.

8, Lincoln Theater at the University of Hartford, Hartford, CT