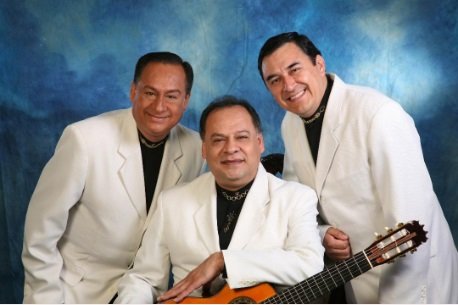 The performance will also take place on the eve of Mexican Independence Day.

Curated by its founder Roberto Carlos, a young Los Angeles-based artist/promoter who has committed his musical journey to bolero music and its traditions, this edition of Boleros De Noche is a celebration of boleros from Mexico and will feature the Mexican bolero icons Los Panchos and the Mexican-American Latin Grammy nominees Trio Ellas. Evoking the bohemian spirit of bolero LA, this magical summer evening will be filled with nostalgia and love.

Ticket prices start at $40; Reserved seating. Tickets are available at FordTheatres.org or 323-461-3673 (for non-visual media 323-GO-1-FORD). To learn about discounts for groups of 10 or more, please visit FordTheatres.org.

The quintessential Latin trio romántico internationally renowned for their boleros, Los Panchos formed in New York City in 1944 by Mexicans Alfredo “El Güero” Gil and Chucho Navarro, and Puerto Rican Hernando Avilés. The trio’s innovative format, which became a standard of the genre, features three voices and three guitars, as well as Gil’s distinctive use of the Mexican requinto guitar for all the lead parts.

Los Panchos is one of the most famous Latin American musical acts of the 20th century. They have sold millions of records and appeared in countless films. Some of their finest recordings were made in collaboration with female vocalists, notably American singer Eydie Gorme, but also Argentinians Estela Raval and María Martha Serra Lima.

The current incarnation of Trio Los Panchos will headline September 15th concert at the Ford Theatres. Based in Mexico City, the trio is now led by Gabriel “Gaby” Vargas Aguilar, the adopted son of original member Alfredo Gil, who plays requinto guitar (like his father) and is keeping their classic repertoire alive. 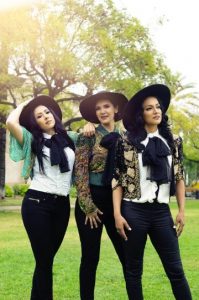 Trio Ellas has been making waves with a unique sound that comes from traditional mariachi roots tempered by the melting pot of musical styles and genres that is the LA music scene. The trio’s debut album Con Ustedes earned them a nomination for a 2012 Latin Grammy. The young trio is composed of Suemy Gonzalez (violin and vocals), a graduate of USC’s prestigious Thornton School of Music, Nelly Cortez (guitarron and vocals), a fourth generation mariachi musician and recreational pilot, and Stephanie Amaro (guitar and vocals), a versatile musician who performs and records in genres ranging from electronica to mariachi.

Their current single is titled “California en Sueños.” Their high level of musical proficiency has allowed them to circumvent stereotypes and work at a world class level, with an impressive track record that includes recordings for artists such as Benjamin Gibbard and Lady GaGa, and live performances with a myriad of top artists ranging from Mariachi Vargas de Tecalitlan to Mariachi El Bronx.

ABOUT THE FORD THEATRES:

The John Anson Ford Theatres are owned by the County of Los Angeles and operated in partnership with the Department of Parks & Recreation and the Ford Theatre Foundation. Situated in a 32-acre regional park in the Cahuenga Pass, the Ford Theatres complex is one of the oldest performing arts venues in Los Angeles still in use. This event is part of the Ford Theatres 2019 Season, an eclectic series of music, dance, theatre, film and family events that represent the diversity of the region. Ford programs nurture artists, arts organizations and audiences through initiatives designed to encourage participation in the arts. The Ford is located off the 101 Hollywood Freeway at 2580 Cahuenga Blvd. East, Hollywood, CA 90068, between Hollywood and Universal Studios in the Cahuenga Pass. Grounds open two hours before show time for picnicking. In addition to a variety of food and beverages available on site, patrons are welcome to bring their own food and drink (wine and beer are allowed). The Ford is disabled accessible.

PARKING:         On site, stacked – $12 per vehicle. Carpool and save: three or more people per vehicle save $5 on parking. A FREE shuttle to the Ford services the Universal City/Studio City Metro Station lot at Lankershim Blvd. and Campo de Cahuenga. The Ford shuttle stops in the “kiss and ride” area and cycles every 20 minutes. Non-stacked parking is available off-site for only $8, with free shuttle service to the Ford, please check the website for details.