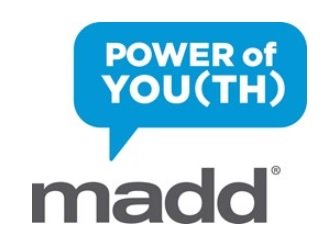 WHAT:           Mothers Against Drunk Driving® (MADD) is equipping parents, school officials and community partners with the resources they need to talk with youth about the risks of underage drinking and drug use. MADD California will host Power of Parents® and Power of Youth® workshops via social media platforms to engage families in the crucial discussions and lifelong consequences we want our youth to avoid. Funding for underage drinking prevention programs was provided by grants from the California Office of Traffic Safety, through the National Highway Traffic Safety Administration.

MADD’s Power of Parents® program theme, “Weed Out Fact from Fiction,” highlights new research on the effects of marijuana use and teens, in addition to the well-known facts about the dangers of underage drinking.  Research shows 74 percent of teens say their parents are the biggest influence on their decisions related to drinking. Parents should start talking as early as 8 years of age, and continue talking often. When students understand the dangers of underage drinking and use of other drugs, they are more motivated to engage in health-promoting behaviors and avoid unhealthy behaviors, like underage drinking and drugs.

“While families practice Safer at Home, we are hoping to spread positivity, encourage creativity and create an engaging learning experience,” said Patricia Rillera, MADD California State Executive Director.  “MADD and local community partners throughout California want to equip parents with the tools to have the important conversations that will keep their kids safe.”

The timing is significant because on January 2, 2020, a 17-year-old driver was allegedly driving on the wrong side of the road and is accused of killing a 61-year-old Huntington Beach woman in a suspected DUI crash. As a result of this crash, it heightens the need of MADD’s Power of Parents® and Power of Youth® underage age drinking to address the ripple effects of driving impaired.

WHEN:             As part of Power of Parents,® MADD has designated April through May 31st as PowerTalk21,®  the critical time during Spring when several milestone events occur that could increase the presence of alcohol for young adults and teens under 21.

WHERE:           Power of Parents® and Power of Youth® workshops to be held via social media and Zoom. Visit @MADDCalifornia via Facebook and Instagram for updates.

WHO:               MADD California staff and victim volunteers will be hosting virtual workshops.