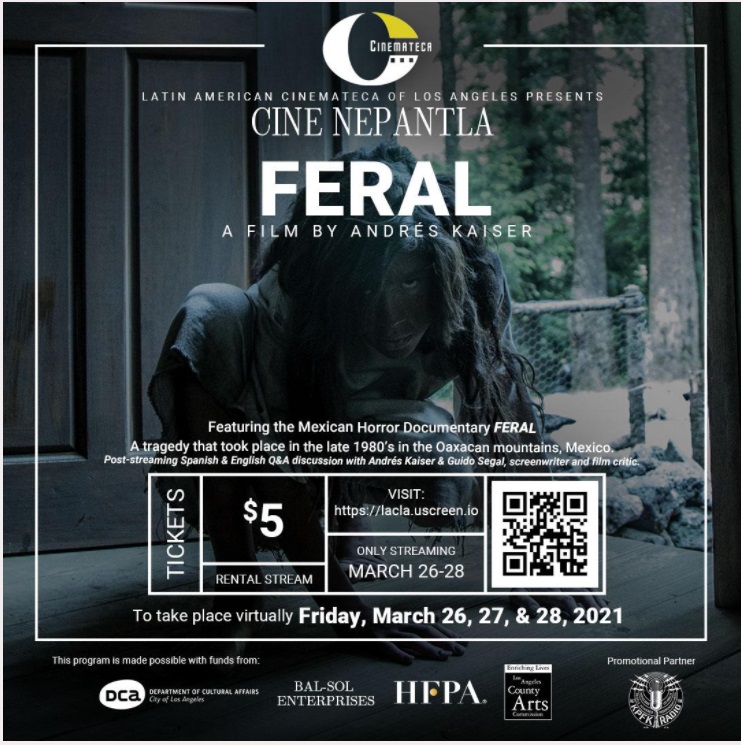 A tragedy that took place in the late 1980’s in the Oaxaca Mountains, Mexico

Kaiser’s found-footage faux-documentary weaves a spellbinding tale by featuring deep character explorations that threatens to spill into malevolence at any moment.

Due to the current pandemic health crisis, LACLA has decided to practice safe, social distancing by offering their Cine Nepantla for the first time in a virtual format.

The streaming will be available on the https://lacla.uscreen.io/   for the price of $5.00 starting Friday March 26 thru the 28th , a post -streaming discussion in English & Spanish with Director Andres Kaiser & Guido Segal, screenwriter and film critic.

This streaming of liminal, in-between spaces and states of being in films from Latin America and by directors of Latin American heritage will feature the Mexican horror documentary Feral.  Directed by the emerging Mexican filmmaker Andrés Kaiser, Feral takes place in the majestic landscape of the Oaxacan mountains, where videotape diaries and interviews reveal a shocking series of horrific events involving a psychoanalyst priest and his children patients.

Nepantla is a Nahuatl word which describes the state of living in-between different cultures. It can also refer to living in the borderlands or being at a literal or metaphorical crossroads. In line with this concept, Cine Nepantla aims to create a space in which meaningful dialogue among audiences of different socio-economic backgrounds, races, ethnicities, ages, abilities, genders, sexualities, nationalities, and religions can take place and effect change. 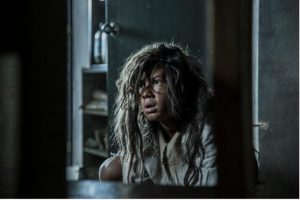 Somewhere in the Oaxacan mountains are the burnt-out remains of a shelter that housed a psychoanalyst priest who was obsessed with rehabilitating savage children to place them back into society. Through videotape diaries, viewers are treated to a portrait of a man whose singular pursuit of this goal saw him excommunicated from the church he holds dear, separated from society, and plagued by a self-doubt which chipped away at his humanity. However, a more sinister picture begins to emerge as interviews with individuals from the nearby village and his close family appears.

Kaiser’s found-footage documentary weaves a spellbinding tale by featuring deep character explorations that threatens to spill into malevolence at any moment. Examining questions of blind faith, trust, and doubt, Kaiser explores the individual in relation to the church through a critical lens that highlights the hypocrisies prevalent within religion and builds on the idea of the “other,” an ostracized figure both feared and reviled.

The videotape diaries reveal conflicting elements: the nobility of the disgraced priest’s mission at odds with the unnatural goings-on that appear at the edges, leaving the audience unsettled. Kaiser keeps the truth hidden as long as possible, hinting at the horrors that lay buried deep within the film. A small cast of remarkable actors helps keep the atmosphere tense and frightening in the build-up to a haunting and unforgettable climax. Feral is a compelling debut that marks Kaiser as a talent to watch.

Mexican director, writer and editor Andrés Eichelman Kaiser studied directing and film writing at Escuela Superior de Artes y Espectáculos in Madrid, Spain. After returning to Mexico, he worked as an assistant editor for the film Rudo y Cursi (2008) by Carlos Cuarón. A year later, he wrote, produced and edited the short documentary En algún lugar, which is about the migration of Central Americans to Mexico. It was presented at the Festival Internacional de Cine Documental in Mexico City, the DOCSDF, in 2010. His directorial debut comes with Feral (2018), which was screened at the Festival Internacional de Cine in Morelia, MX in 2017. Most recently, Kaiser has been working on the horror film Preciosísima sangre, which takes place in 18th-century Mexico and follows a priest sent to investigate a series of strange murders that have taken place within one of the convents of the church.

The concept of nepantla refers to the experience of living in-between two or more cultures. Nepantla originated in the sixteenth century from Nahuatl, and Uto-Aztecan language, to describe the “in-between-ness” Mexicas (Aztecs) felt under Spanish colonization. The concept was further developed by Chicana theorists, most notably Gloria Anzaldúa who described nepantla as a site of transformation where multiple and different perspectives come into contact. According to Anzaldúa, it is through the exchange of ideas, tenets, and identities that actual change in the world has the potential to occur. Building from this concept, Cine Nepantla aims to create a space in which meaningful dialogue among audiences of different socio-economic backgrounds, races, ethnicities, ages, abilities, genders, sexualities, nationalities, and religions can take place and effect change.