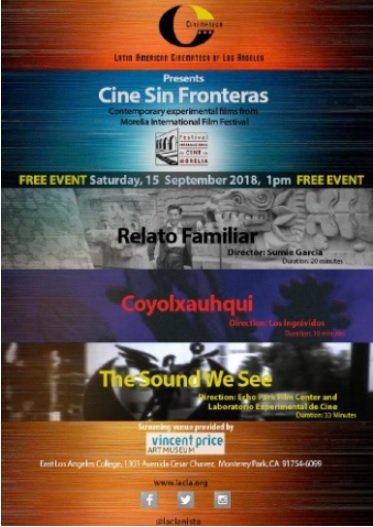 FotoSaeki is a deserted photography goods store in the Santa Maria la Ribera neighborhood in Mexico City. Its owner, Yukio Saeki, arrived in Mexico in 1955. At the age of 83, he can still hear the echo of a hot Monday morning in Japan as he walked across a field toward the ocean when the atomic bomb fell.

Coyolxauhqui recasts the mythical destruction of the Aztec goddess Coyolxauqui in a searing evocation of femicide in the Mexican countryside.

The Sound We See

The Sound We See documents a Mexico City Symphony that was filmed for 24 hours in the Mexican capital. The footage was processed manually during two days at the Experimental Laboratory of Cinema (LEC).

CINE SIN FRONTERAS IS MADE POSSIBLE IN PART BY: