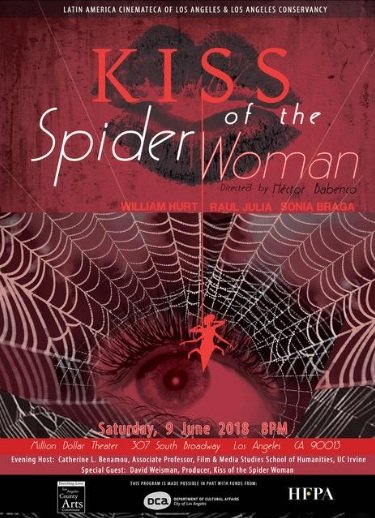 Presents the Kiss of The Spider Woman

Vesper Public Relations. Los Angeles, CA. May 2018.  Latin American Cinemateca of Los Angeles (LACLA) in collaboration with the Los Angeles Conservancy’s Last Remaining Seats film series will present the film the “Kiss of The Spider Woman” on June 9, 2018 at the Million Dollar Theatre.

“Kiss of The Spider Woman” is the 1985 drama-packed film directed by Hector Babenco (Argentine-born Brazilian film director) . The Brazilian-American film stars William Hurt, Raúl Juliá, Sônia Braga, José Lewgoy, and Milton Gonçalves.  An instant classic, this remarkable film was a sophisticated and high-profile queer triumph in the midst of the conservative 1980’s.

In the film you get to meet Valentin Arregui and Luis Molina, two distinct prisoners. Arregui serving time for activities with a revolutionary group and Molina, a transgender who identifies as a female incarcerated for having sexual relations with an underage boy.

The story is a “film within a film”, featuring Luis Molina episodically telling Valentin Arregui the plot of a fictional film called Her Real Glory ostensibly produced in Germany during the Second World War by the Nazis.

It unfolds with a sequence of friendship, corruption, betrayal and romanticism as Molina befriends Arregui with the purpose to spy on behalf of the secret police. After successfully being on the police’s side, Molina is released from prison, later causing a fabricated story to unfold on her “involvement” with revolutionary groups.

As noted by Barbara Fulks, Puig’s work deals with the “ polemical nature of the relationship between sexuality and revolutionary politics. The conflict between power and sex, and their functions in society”

The film is directed by Hector Babenco, who became the first Latin American director to receive a nomination,  he based it on the homonymous 1976 novel “El beso de la mujer araña” (Kiss of the Spider Woman) by Manuel Puig. The Argentinian author was the first to adapt his own novel as a stage play. A Broadway musical of the same name, also based on the novel, was produced in 1993.

What: The Kiss of The Spider Woman

Tickets can be purchased through the L.A. Conservancy at the following link.

Check out the 2018 Last Remaining Seats lineup at the following link.

About The Million Dollar Theater: