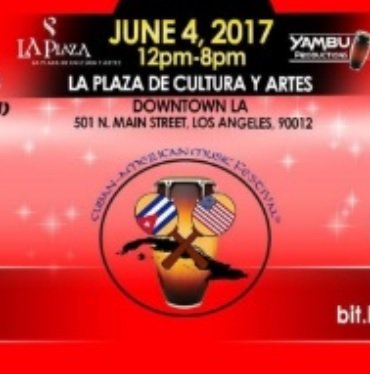 Vesper Public Relations. Los Angeles, CA –  May, 2017. LA Plaza de Cultura y Artes in conjunction with Yambu Productions has designated June 4, 2017 for the return of the Cuban-American Music Festival after a three-year absence. The festival will be a regional destination event that features four musical acts, dancing, local Cuban artists, Cuban Food and drinks. The festival will take place at La Plaza de Cultura y Artes in downtown LA from noon to 8 p.m.

The festival will also have LA’s finest Cuban bands: Charanga Cubana, Changui Majadero, Rumbankete, and the Arsenio Rodriguez Project. The festival will not only bring the Cuban-American community together but introduce Angelenos to the vast and rich heritage of the Cuban culture.

Tickets for festival are $20 general admission and $40 VIP and can be purchased at http://bit.ly/lacubanfest or http://bit.ly/cubanfestla. The event is 21 and older only.

The Arsenio Rodriguez Project, is an All- Star Ensemble of LA’s top musicians, who pay tribute to Arsenio Rodriguez, known as “the father of salsa”. ​ The Ensemble formed in 2011 to celebrate Arsenio’s life and legacy, present the original arrangements of the man credited as one of the greatest Afro-Cuban music bandleaders, composers and innovators.

Charanga Cubana, a traditional Cuban music group was founded in Los Angeles in 1996 by Cuban bass player Edgar Hernandez. The orchestra has participated in many of LA’s local Cuban cultural events, as well as, nightclubs in Southern California. Charanga Cubana has released three compact discs, played at Carnaval de la Calle Ocho in Miami, and played at Fiesta Broadway in L.A.

Rumbankete is the only musical force currently performing contemporary Cuban dance music (timba) in Los Angeles. The band plays in various formats but prefers to perform with its full 12-piece line-up. Its front line includes singers Gonzalo Chomat (ex Conexión Salsera) and Iris Sandra Zepeda (ex Arte Mixto), both consummate musicians from Cuba who have made LA their home.

Yeni Valdes, born and raised in Pinar Del Rio, was the first and only female vocalist of Los Van Van, longest running, most famous Timba band of Cuba. She started her career with NG La Banda, impressing audiences with her intense vocals and embellished extended improvisations. She was known for improvising up to 20 minutes on stage, engaging the crowd with her vocal prowess and stage presence.

​With Los Van Van, she broke the glass ceiling for women singers, exhibiting the power behind Cuban women, provoking ecstasy and joy among fans and critics alike. Now living in San Francisco with her husband, she travels the world singing solo.

Tickets are available for purchase at La Plaza during Museum hours, or online at http://bit.ly/lacubanfest or http://bit.ly/cubanfestla