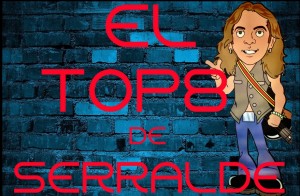 Vesper Public Relations. February 25, 2015 (Los Angeles) The unique and creative style of popular radio personality, Serralde returns to the airwaves this Sunday, March 1st at 12 noon with a new national Latin music countdown show.  The weekly program features the top Latin music songs receiving airplay and sales in the nation as reported by Billboard magazine.  Launching the program on Los Angeles radio station Radio Centro 93.9 fm, known as the “official house of the Mandril Show”, Serralde will be on air Sundays at 12 noon.

The weekly one-hour countdown show will showcase the top eight (8) Latin songs receiving airplay, downloads and sales as reported by Billboard magazine.  The program will also include artist interviews and interesting news covering Latin music recording artists.  In addition, two (2) new songs will be presented each week to the listening audience.  Other interactive components and contests will be announced during the program.

Serralde who worked for several years on the popular radio show “La Regadera con Isacc y Serralde” in Los Angeles and in various U.S. markets via syndication, is also well-known as a recording/performing artist for his Spanish music.  Demonstrating a strong desire to return to radio and his fans, Serralde has prepared a different show that promises to be entertaining and engaging for his fans.  “Music is in my blood and soul and I truly appreciate this opportunity to once again be on the radio with something different and fun,” said Serralde.  “I invite everyone who loves Latin music to join me on Sundays at noon for a fun time together.  Our show includes all genres of Latin music and no one is left out” he added.

The show will launch in the Los Angeles market on Radio Centro 93.9 fm with plans to expand to additional markets in coming weeks.