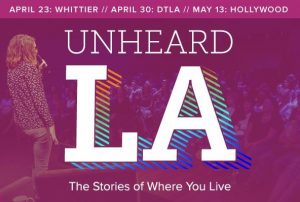 PASADENA – April 12, 2017 – Southern California Public Radio (SCPR) events and engagement platform KPCC In Person is piloting a new community-driven storytelling series: Unheard L.A. — the stories of where you live explores Southern California through the eyes and experiences of some of the millions of people who call it home.

Unheard L.A. will unfold over the course of three live shows in different venues around L.A. County. Each show will be free and open to the public and feature a distinct lineup of real people sharing true stories of struggle and survival, of hope and fear, of the unexpected and the unbelievable. These are the unheard stories of L.A., the stories of where you live.

Ruth B. Shannon Center for the Performing Arts on Sunday, April 23

Uptown Whittier provides the backdrop for the first Unheard L.A. show. Immerse yourself in the lives of our storytellers as they sing songs of immigration, ponder in verse, honor beloved hometowns and celebrate the rich diversity of Southern California. This show features a performance by Cornerstone Theater Company.
http://www.scpr.org/events/2017/04/23/2311/unheard-la–live-in-whittier-ep1/

Unheard L.A. heads to the heart of downtown L.A. for its second show, which is at times hilarious and heartbreaking – and captivating throughout. Storytellers present true tales of hacking into comedy school, the magic and mania of songwriting, the unexpected charm of a dive bar and more. The comedy variety group Asian AF will join us for a special performance.

Assistance League of Los Angeles Playhouse on Sunday, May 13

Tucked away in a nondescript building on a nondescript corner in Hollywood is a striking theater that will house the third Unheard L.A., which features Young Storytellers and community storytellers from across Southern California. Lose yourself in personal pieces ranging from a 14-year-old’s unyielding stand on screen time to a desperate search for Zumba in K-Town and the day TSA changed one person’s understanding of identity.

Funded in part by the California Wellness Foundation, the project reinforces SCPR’s mission to be a centering institution and to better reflect the diverse communities of Southern California in its multiplatform service. The shows will feature a distinct lineup of community members telling their stories from a range of experiences, backgrounds and perspectives as there has been a significant outreach phase to invite community members with diverse backgrounds from across Southern California to participate.

For more information on the series, go to www.KPCC.org/unheardLA. To learn more about KPCC In Person and to see other upcoming events, go to www.KPCCInPerson.org or contact Jon Cohn, managing producer, 626-583-5111 or jcohn@kpcc.org.

Southern California Public Radio (SCPR) is a member-supported public radio network that operates 89.3 KPCC-FM in Los Angeles and Orange County, 89.1 KUOR-FM in the Inland Empire, 90.3 KVLA in the Coachella Valley, 89.9 FM in Santa Barbara, and 89.5 KJAI Ojai in Ventura County. Reaching more than 700,000 listeners every week, SCPR is the most listened-to public radio news service of any kind in Southern California. SCPR serves the diverse communities of Southern California with award winning local news coverage as well as the most National Public Radio (NPR) content available anywhere in the region. SCPR’s flagship station, KPCC, has garnered more than 450 journalistic honors since 1999, more than all of the other radio stations in Los Angeles combined. SCPR features signature public radio programs from APM, the BBC and PRI. Listeners around the globe can access news, join blogs, download podcasts, as well as hear a live web stream at www.kpcc.org. KPCC In Person, SCPR’s events and engagement platform, regularly convenes forum programs and live events throughout the region.