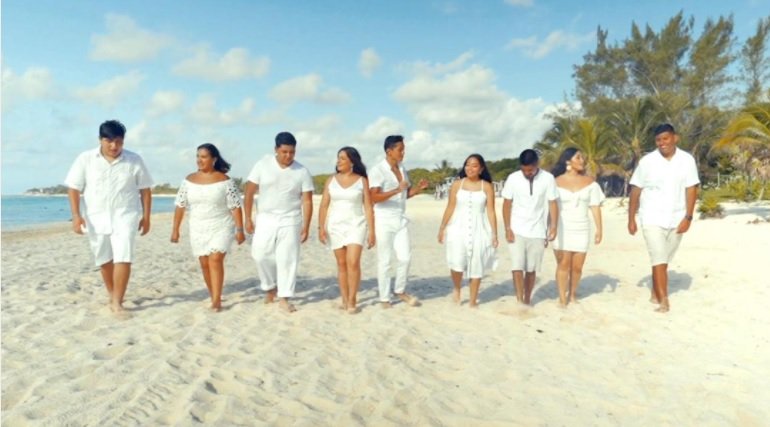 Vesper Public Relations. September 2020—Mariachi Herencia de México, comprised of a group of teenage Mexican American musicians, is revolutionizing traditional Mexican music with the goal of attracting a new generation of spectators to the genre.

The ensemble presents the new video titled “Si Nos Dejan” in commemoration of Mexican Independence Day and to kick off Hispanic Heritage Month in the United States. “Si Nos Dejan” is a song penned by the unforgettable Mexican icon, singer-songwriter, José Alfredo Jiménez.

“It’s important that our generation knows who José Alfredo Jiménez was,” says Isaías López, 15 years old, singer and violinist with Mariachi Herencia de México. “His songs are some of the most important songs in Mexican music. As Mexicans, they give us identity throughout the world.”

“What better way to celebrate the 210 years of México’s Independence than with mariachi music. It was an incredible experience to travel to Playa del Carmen (Quintana Roo) to record this beautiful video, to show the world one of the many magical places in México,” says Karla de la Cerda, 16 years old, singer and violinist.

“Si Nos Dejan” is the second single from Mariachi Herencia de México’s fourth album titled, “Esencia, Vol. 2,” released earlier this year on May 29, which features the group’s second collaboration with one of the most revered and innovative figures in the genre, GRAMMY® award winning composer and musical director Rigoberto Alfaro.

This album shows how far this young group of musicians have come, since their debut CD four years ago, which garnered a Latin GRAMMY® nomination.

“The opportunity to work and learn from maestro Alfaro is one of our highest honors. Thanks to him, we created a unique sound that combines references from the Golden Age of mariachi music, with a fresh and modern sound,” says López.

“Si Nos Dejan” features a beautiful duet, a fusion of both male and female voices.

“We’re excited to release our own version of this classic song and grateful for the opportunity to record the music video in México,” says De La Cerda. “Si Nos Dejan” is the song with the highest number of streams from our new album, signaling the strength and popularity of the song.

Mariachi Herencia de México was formed in Chicago and is composed of 18 teenagers between 15 and 19 years old. “In every recording and in every concert, this group proves their commitment to Mexican music,” says Alfaro. “These young musicians understand the essence of our music. The have an important role in helping to rescue mariachi music by sharing it with new generations.”

The Latin GRAMMY-nominated group of young Mexican-American musicians has released four highly acclaimed studio albums with chart-topping debuts on both the Billboard and the iTunes Latin Albums charts, defying a music industry trend and pointing to a revival in recorded mariachi music.

Signed to IMG Artists, a major international talent agency, Mariachi Herencia de México has toured throughout the U.S., Mexico and Canada. The group has performed alongside major artists like Lila Downs, Aida Cuevas, Los Lobos, Pedro Fernández, and Mariachi Vargas de Tecatitlán, demonstrating that this group of young musicians have the talent, training and bravado to hold their own with the best in the world.