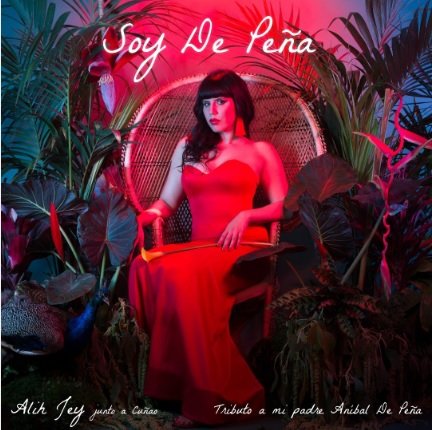 A tribute to her renowned father Aníbal De Peña, in collaboration with Latin folk band Cuñao

Album release show at Civic Center Studios in Los Angeles on May 30th to also include sets by Nina Diaz (of Girl in a Coma), Cuñao, and the legendary Aníbal De Peña in his second ever Los Angeles performance

Vesper Public Relations. Los Angeles, CA. (May 2019) – The genre-defying Dominican bilingual singer-songwriter Alih Jey will release her newest album, Soy De Peña, on May 24th, 2019. Alih Jey presents a distinctive approach to alternative folk music within an ever-growing roster of Dominican female artists. Dominican women have been taking center stage in music, and Alih is bringing her bolero-indie flavor and fresh eclectic sound into the mix. A bona fide rockera and previously Grammy-nominated for Best Rock Solo Vocal album, Alih kicks it up a notch in her newest release by revamping culturally significant songs from the Dominican Republic.

Soy De Peña chronicles her family’s musical heritage with tributes to her father (Aníbal De Peña)’s much beloved repertoire, and her grandfather (Aníbal De Peña Sr.)’s lesser-known musical poems.  Aníbal De Peña is considered a key figure in the Dominican Republic’s Golden Age of music with a catalogue ranging from romantic boleros to songs with social justice and political messages. De Peña’s biggest success “Mi Debilidad,” is a melancholy love song, and the first single from Alih Jey’s tribute album. In Latin America a “peña” is a celebratory gathering of artists presenting their work and can also mean mountain. This confluence of meaning is an appropriate title for a project dedicated to a rich and meaningful musical legacy.

“While remaking Mi Debilidad, I changed the time signature from 4/4 to 6/8, because it just felt right to me! And it turns out that the new version sounds a lot like an older genre from the 1860s in the Dominican Republic called the Dominican ‘criolla’.  I realized the lyrics and melody of my father’s original bolero song combined with my triple time variation and Cuñao’s stripped down arrangements, gave it that criolla feel. It was pretty exciting! The criolla’s precursor is actually the ‘barcarola’ of Venice, Italy (a rhythm reminiscent of the gondolier’s stroke, almost invariably in 6/8 meter at a moderate tempo), that got to the DR in the 1850s. Hence, the triple meter characteristic,” says the young recording artist.

Cameron Bartolini produced the album after an introduction to Alih Jey by another Dominican artist Jarina De Marco. After listening to a recording of a live performance of the songs, he felt a distinct connection to the music and story. The project is also collaboration with Alih Jey’s fellow artists and friends Cuñao, a Latin alternative folk band. This collaboration between Alih Jey and Cuñao provides a fresh take on this timeless music while remaining true to Aníbal De Peña’s classic songs.

To celebrate the release of Soy De Peña, Alih will perform at Civic Center Studios in Los Angeles on May 30th. Nina Diaz, the guitarist/singer of the celebrated indie rock band Girl in a Coma, will be opening the night, and Alih’s collaborators, Cuñao, will treat the audience to some of their originals. Alih’s father Aníbal De Peña will also be sharing the bill in a rare Los Angeles performance for the celebrated singer/songwriter. The show will be his second performance ever in city of angels.

Alih’s grandfather, Aníbal De Peña, Sr, wrote this song as a serenade for Alih’s grandmother, Esperanza, in the 1930’s. Alih’s father recorded it in the 1960’s and it became one of his most beloved songs.

“Déjame Beber” means “Let me drink you.” It’s about desiring someone deeply, and wanting to satiate that thirst.

“Tú No Tienes La Culpa” was written by Alih’s grandfather and features a duet with Alih and her father on the album – three generations in one song.

“Enriquillo” is about the Taino warrior of the same name that fought against the Spanish. It’s an epic poem that Aníbal wrote as a metaphor for the Dominican Civil War. It is still sung in Universities and schools all over the Dominican Republic.

This song is about being totally enthralled by a lover.

This song stands out in the album because of its doo wop feel. While going through her father’s repertoire, this one seemed especially unique to Alih. It’s about falling into despair and longing to be released from heartache.

The title means “Maybe tomorrow”, which fits in perfectly to the song’s theme of heartbreak. Cuñao sings in a big chorus behind Alih.

“A Mi No Me Interesas” (By Alih Jey De Peña)

The only composition penned by Alih on the album. It’s about a breakup.

“Mi Debilidad” is the first single off the record and Alih’ dad’s biggest success in the 1960’s.

Recorded, produced and mixed at Lineage Studios by Cameron Bartolini

Edwin Burgos, vocals on “A Mi No Me Interesas”

Back cover and inside photo by Pete Galindo