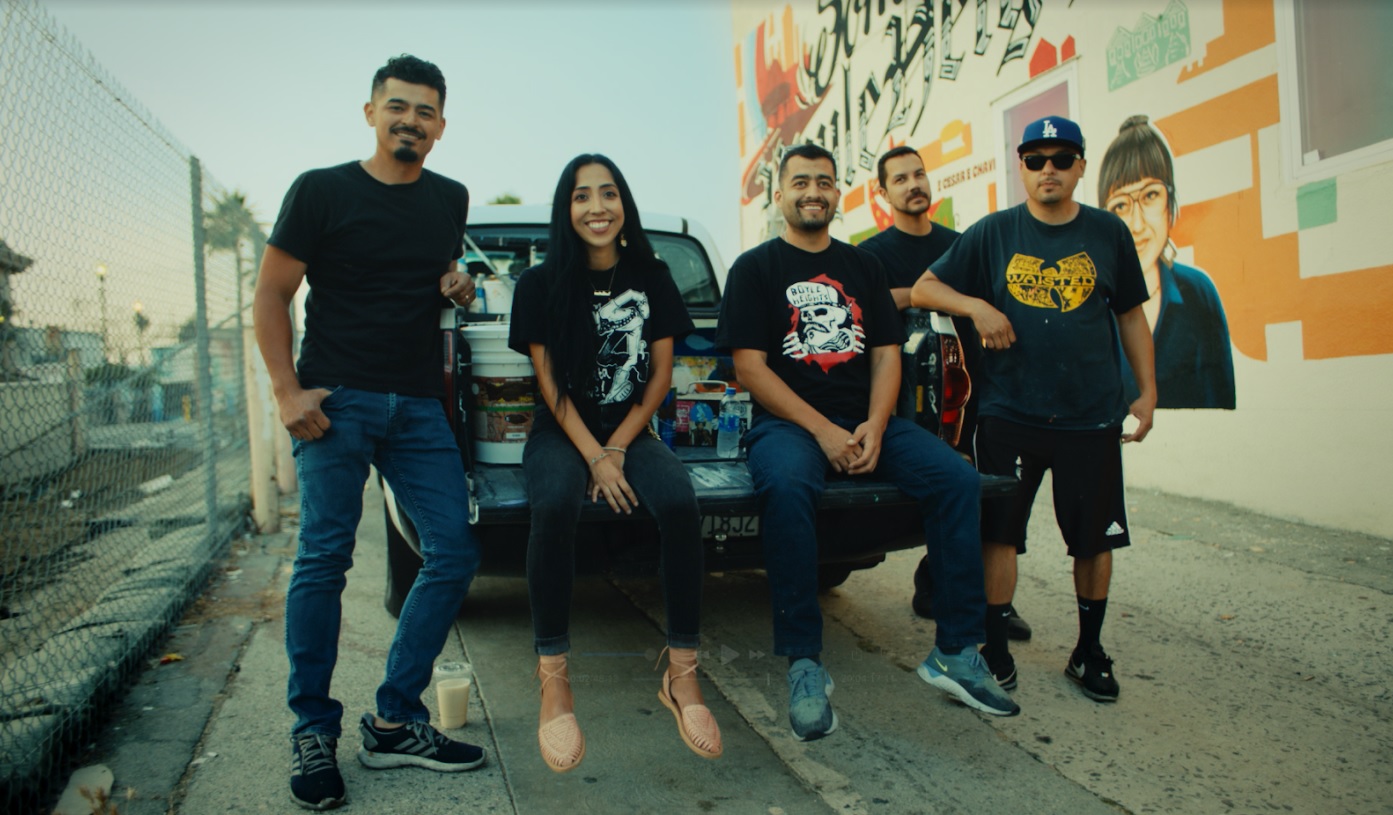 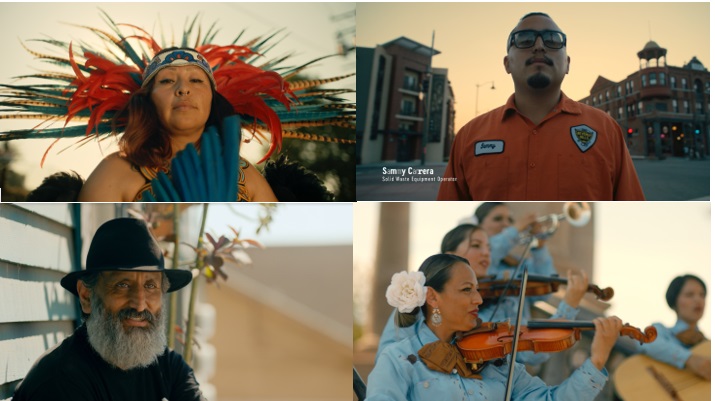 LOS ANGELES, CA —August 3, 2021. DoorDash unveiled its latest campaign, focused on celebrating the people and culture of Boyle Heights, one of the oldest Latino neighborhoods in Los Angeles.

Recognizing the vital role Boyle Heights plays in the Latinx community, DoorDash created the campaign, titled “Somos Boyle Heights,” as an invitation to discover the rich, vibrant, and uniquely Latin-American flavors of this historic LA neighborhood as told by its local artists, merchants, and residents. To bring the interactive campaign to life, DoorDash collaborated with artists Levi Ponce, Marlene Solorio, Hector Arias, and the Kalli Arte Collective.

The custom murals combine art with technology by encouraging visitors to scan a QR code to visit SomosBoyleHeightsFilm.com, a dedicated microsite which features photos of local residents and restaurant owners in addition to a short documentary that highlights local resident stories. 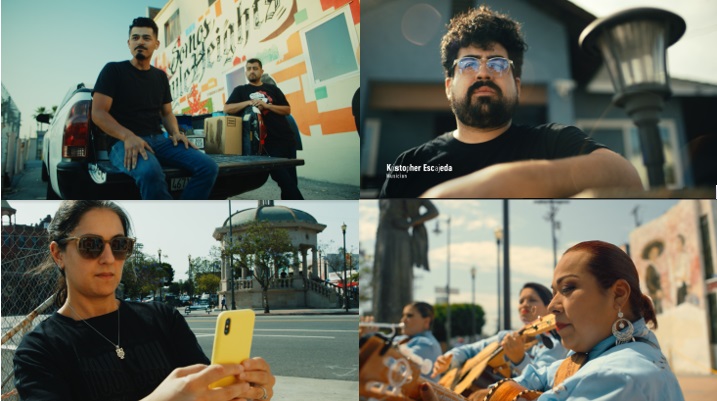 “Our mission at DoorDash has always been to empower local communities, and we’re excited to further this mission by celebrating the incredible story of the historic Boyle Heights neighborhood,” said Monisha Lewis, Senior Manager, Consumer Marketing at DoorDash. “With this campaign we set out to not only spotlight this neighborhood’s growth and resilience, but also authentically celebrate the people who help it thrive.”

Angelenos will have an opportunity to participate in this interactive art experience by uploading photos of themselves at the mural sites with captions about their own Boyle Heights stories while sharing what the neighborhood means to them. The photos, videos and stories will live on the microsite in celebration of Boyle Heights and help online visitors discover and appreciate the neighborhood’s beauty.

I’ve included hi-res images and the final documentary here and below you will find information on the muralists and residents featured in the film. Please let me know if you are interested in sharing the news.

Levi Ponce, the son of a sign maker and seamstress, has been studying art and form since childhood. After earning a B.A. in 3D Animation Levi began painting and organizing the creation of murals in Los Angeles. These murals go beyond paint – they are community projects that bring together a wide range of artists, business owners, and youth.

Hector Arias graduated as a dreamer in 2011 from California State University, Los Angeles. His butterfly motif is a symbol of immigration and stages of life. His work has been featured on the wall of the Mexican Consulate building in Los Angeles as well as the library in South East Los Angeles.

Kalli Arte Collective, the duo of Adriana Carranza and Alfonso Aceves, two self-taught artists from Boyle Heights. They create art representative of their barrio, their home, the foundation of our culture. The artistic couple believes and understands that the status of our bodies, homes, and community reflects the status of our spirits.

Marlene Solorio: Marlene Solorio is a Mexican-American social activist, illustrator, and graphic designer whose work focuses on amplifying the voices of Latin American indigenous communities. Her best-known work is an illustration of indigenous Ecuadorian activist Nemonte Nenquimo, in honor of Nenquimo’s inclusion in the Time 100. 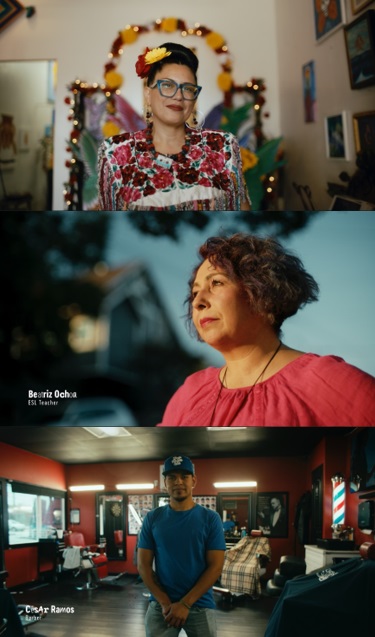 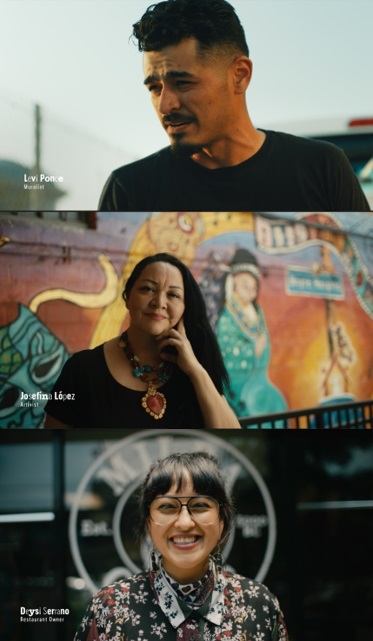 Rafael Cardenas has always been driven by the creative process that has fueled him through decades of artistic vacillation. From poet to hip-hop lyricist, theater actor to film, he has refined his love for the importance of living in the moment. Currently, his life of observation/creation has inspired him to document the “moment” through the lens.

At Milpa Grille, we pay homage to our ancestors and the practice of milpa by featuring the three core ingredients—corn, squash, and beans—in our menu. Our culinary creativity allows us to reimagine traditional Mesoamerican food and share our vision with our community.

Beatriz Ochoa has lived in Boyle Heights for almost all of her life, and has taken joy in being a homeowner who has opened her property to an eclectic array of local artists. She teaches ESL to her neighbors and friends, and is a pillar of the community, providing affordable living quarters for the working-class community that she so dearly loves.

Cesar is a young entrepreneur who is proud of being from Boyle Heights, and is passionate about

dispelling the myths and stereotypes about the neighborhood being just “lowriders and gangsters.”

custom garments. Tello’s father, a tailor, taught him to sew at age eight in their hometown of

Mazatenango, Guatemala. Little did he know that sewing would lead him to Boyle Heights and to a

long career associated with mariachi music, declared by UNESCO as part of the Intangible

Cultural Heritage of Humanity in 2011.

Josefina López is best known for authoring the play and co-authoring the 2002 Sundance Award-Winning film, Real Women Have Curves. Josefina was undocumented for thirteen years before she received Amnesty in 1987 and eventually became a U.S. Citizen in 1995. After growing up in Boyle Heights, Josefina became a graduate of Columbia College Chicago, has an MFA in Screenwriting from UCLA’s School of Film & Television, and has a “Diplome de Cuisine” from Le Cordon Bleu, Paris. She opened CASA 0101 Theater and Casa Fina Restaurant in Boyle Heights as a way to give back to and celebrate her community.

Sammy is a father of two young girls with a third on the way. He drives a garbage truck during the day, but spends his evenings writing poetry, performing and spending time with his young family. His family history in Boyle Heights stretches back to the 1950’s, and he’s passionate about keeping the culture in Boyle Heights alive for future generations.

At home in Boyle Heights, Escajeda is a mild-mannered 28-year-old working out of his

Batcave, a bedroom/studio in the home where he lives with his grandparents. Most of the gear that

has become part of NKRIOT’s sci-fi disco was in some way altered by Escajeda himself.

she was 3 years old. Holding place on Cesar Chavez and Soto for years, she knows the streets of Boyle

Heights. Vending fruit and other goods her whole life, she was subject to police harassment and

persecution over the years, She’s also a proud Aztec.