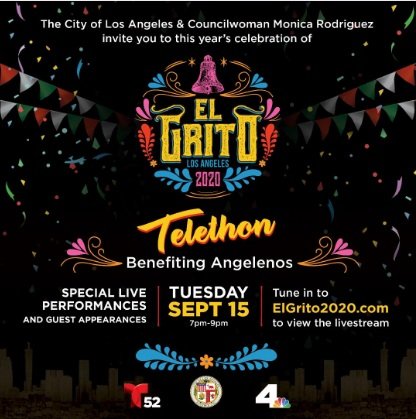 VIRTUAL TELETHON TO RAISE FUNDS FOR ANGELENOS IMPACTED BY COVID-19

El Grito serves as the official kick-off celebration for Latino Heritage Month (September 15 – October 15, 2020) in the City of Los Angeles. This year’s El Grito, which traditionally brings Angelenos together at the steps of City Hall, will feature virtual musical performances due to the pandemic. The telethon will also highlight Los Angeles’ vibrant Latino community as well as showcase the immense contributions Latinos have made to the City’s culture, history, and economy.

The unprecedented COVID-19 pandemic has disproportionately affected Latinos who help keep Los Angeles moving and the supply chain alive during the crisis. The Latino community plays a critical role as frontline essential workers in the food and agricultural industry and service sectors. The City of Los Angeles and Councilwoman Monica Rodriguez will host a telethon to provide additional relief to Angelenos hardest hit by COVID-19 and raise funds to support Comunidades Indígenas en Liderazgo (CIELO’s), Undocu-Indigenous Fund.

The virtual concert will run from 7 PM to 9 PM. During the program, the City of Los Angeles will join the Consul General of Mexico in re-enacting the historic Cry of Dolores and ringing of the bell, which commemorates the call to arms pronounced by Miguel Hidalgo in 1810 which launched the Mexican War for Independence.

El Grito Telethon can be viewed on ElGrito2020.com.

Los Angeles Latino American Heritage Month is a celebration of Latino Americans in the United States. For over three decades, the City of Los Angeles has held a series of events throughout the month to highlight the significant contributions that Latinos have made to the City’s past, present, and future.

CIELO is an indigenous women-lead organization and serves as a link, a resource, and liaison for migrant indigenous Angelenos. CIELO works to address the social, economic, and cultural challenges faced by the indigenous community in Los Angeles and advocates for language access rights, cultural preservation, and reproductive justice. CIELO is an indigenous women-led non-profit organization that works jointly with indigenous communities residing in Los Angeles to provide language access rights and fight for social justice through a cultural lens. One of the primary purposes of CIELO is to create visibility of indigenous migrants in Los Angeles. This work is essential because, during moments of crisis, indigenous migrants are forgotten as we have seen during this COVID-19 pandemic. More information about CIELO at (https://mycielo.org).

Telemundo 52 Los Angeles / KVEA is Telemundo’s west coast flagship local television station serving Spanish-speaking viewers in the Los Angeles market. Owned by NBCUniversal, Telemundo 52 has been delivering local news, information, and entertainment to viewers throughout Southern California for nearly 30 years, reaching viewers in five counties. Viewers turn to Telemundo 52 for breaking news, weather and sports headlines across a variety of platforms, including online at Telemundo52.com and via mobile and social media channels. Telemundo 52 also produces the popular 30-minute lifestyle program “Acceso Total” which airs weekdays and features national entertainment news, celebrity interviews, as well as the latest in music, culture, and social trends.  Today, Telemundo 52 produces nearly 30 hours of local news and programming each week and demonstrates its commitment to the community by cultivating local partnerships and capturing the diversity of Southern California.

NBC4 is the West Coast flagship station of the NBCUniversal Owned Television Stations, serving the vast region since 1949.  NBC4 produces 41 hours each week of local news and weather, and the station features the largest award-winning investigative unit in Southern California.  The station also produces “California Live,” a live weekday 30-minute lifestyle show featuring the latest in entertainment, travel and lifestyle trends across the Golden State.  NBC4’s news operation has received nearly every industry award bestowed on local news, including numerous Los Angeles Emmy and Golden Mike Awards, two national and two regional Edward R. Murrow Awards, and a Peabody Award.  NBC4 news is delivered across the main broadcast on channel 4, at www.nbcla.com, and through multiple interactive social media platforms 24/7.  The NBC Owned Television Stations, a division of NBCUniversal, also operates COZI TV (www.cozitv.com), a national network that brings viewers some of America’s most beloved and iconic television shows and movies. 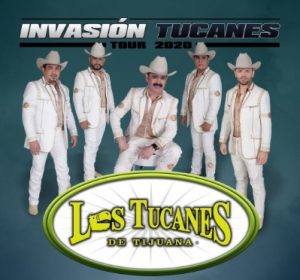 LOS TUCANES DE TIJUANA was founded at Bar Razza’ s Club in Tijuana, B.C. Mexico on April 13, 1987. Since then, their songs have been at the top of the charts in México and the United States. Mario Quintero Lara is the only composer and has created each of all the songs. Los Tucanes de Tijuana is the only Regional Mexican Band that has been able to simultaneously place 6 songs on Billboard’s Top Latin Albums (1996-1997). They have sold more than 14 million albums all over the world and have 72 hits on the Billboard list.

Their accomplishments also include: 34 BMI awards in the past years; Mario Quintero Lara has consecutively been awarded as composer of the most played songs in the United States. The band also received the Latin Grammys 2012 Best Norteño Album, for “365 Días.” At least 15 of their albums have sold more than 500,000 units, and the band has received 12 Latin and American Grammy nominations.

For the past years, Los Tucanes de Tijuana has been performing 120 concerts per year with an

average attendance of 5,000 people per concert. More than 5 million attendees have enjoyed their concerts. Los Tucanes de Tijuana is the Regional-Mexican band that better communicates with youth from both sides of the border Mexico-USA, Central and South America. 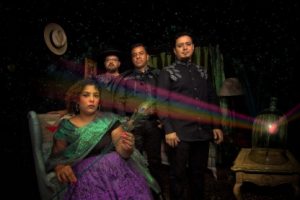 LA SANTA CECILIA — Los Angeles based Grammy-winning Mexican-American rock band La Santa Cecilia draws inspiration from all over the world utilizing Pan-American rhythms including cumbia, bossa-nova, rumba, bolero, tango, R&B, jazz, and klezmer music. Named after the patron saint of music, La Santa Cecilia sings with a captivating voice about love, loss, and everyday struggles in both English and Spanish. The band has become the voice of a new bicultural generation in the US and Mexico, fully immersed in modern music, but always close to their Latin American influences and Mexican heritage.

The group won a Grammy for ‘Best Latin Rock, Urban, Alternative’ Album in 2014 for their album Treinta Días. They were nominated in the same category for their album Buenaventura in 2017 and for Amar Y Vivir in 2018 (all on Rebeleon/Universal Music). With 7 albums under their belt, La Santa Cecilia are currently at work on their 8th album, to be released in 2020.

La Santa Cecilia exemplifies the modern-day creative hybrid of Latin culture, rock, and world music. Their unique sounds and the experience of their colorful, passionate performances captivate both loyal fans and new listeners. They perform over 100 shows a year, have collaborated with artists ranging from Elvis Costello to John Paul Jones and their music has been featured in movies (Coco, The Book of Life)) and Television series (Weeds, Entourage*, The Bridge* and was the theme song for the Netflix series Ingobernable). In 2019, La Marisoul performed at the Joni Mitchell At 75 tribute, in March with the LA Philharmonic at The Work And Music of Yoko Ono tribute concert (both at the Hollywood Bowl) and in November, the group was one of the headliners at Tropicalia Festival in LA. La Santa Cecilia released their critically acclaimed 7th album self-titled; “La Santa Cecilia” on October 18th, 2019. 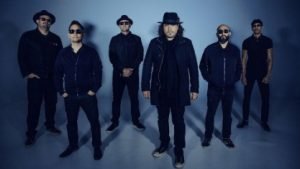 OZOMATLI — In their eighteen years together as a band, celebrated Los Angeles culture-mashers Ozomatli have gone from being hometown heroes to being named U.S. State Department Cultural Ambassadors.

Ozomatli has always juggled two key identities. They are the voice of their city and they are citizens of the world. Their music — a notorious urban-Latino-and-beyond collision of hip hop and salsa, dancehall and cumbia, samba and funk, merengue and comparsa, East LA R&B and New Orleans second line, Jamaican ragga and Indian ragga— has long followed a key mantra: it will take you around the world by taking you around L.A.

More than ever before, the band is both of the worlds and of L.A. Originally formed to play at a Los Angeles labor protest almost two decades ago, Ozomatli spent some of their early days participating in everything from earthquake prep “hip hop ghetto plays” at inner-city elementary schools to community activist events, protests, and city fundraisers. 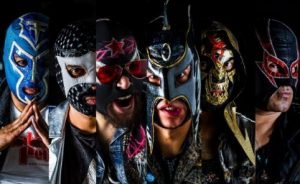 EL CONJUNTO NUEVA OLA (ENCO) is a fun and entertaining band from Mexico City, Mexico that mixes cumbia music with new waves. The first single from their album is titled “CHIDO, CHIDO” (“Cool, cool”) a classic title in the history of tropical music, and is sure to be unique.