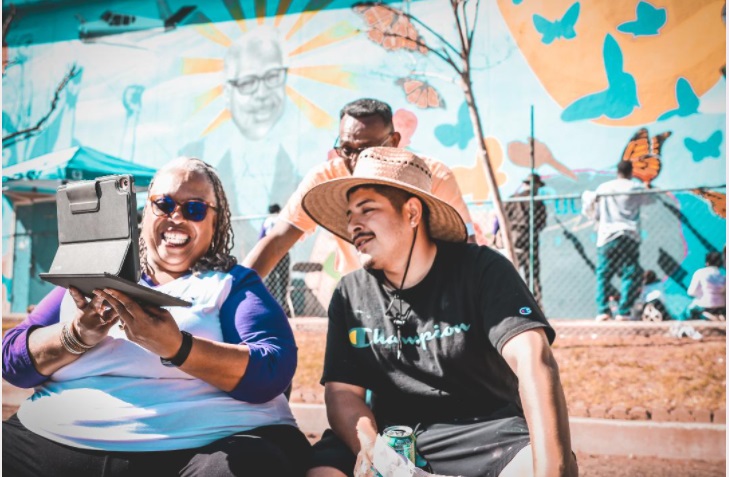 Inspiring community members to advocate for positive social change in the neighborhood and beyond.

LOS ANGELES, CA — March, 2022. Pacoima’s Hillery T. Broadous Elementary unveils the latest addition to mural city, a tribute to the school’s namesake, his family, and celebration of the city’s history of ethnic inclusion and solidarity. The strategic placement of the (145 long x 27 tall) mural (one of the largest murals for LAUSD) off Filmore Street, one of Pacoima’s main thoroughfares, and across the street from Hubert Humphry Memorial Park will ensure that its impact is felt throughout the surrounding neighborhood.

The centerpiece of the mural is a portrait of Hillery T. Broadous who’s community building efforts helped shape Pacoima’s development from a small agricultural town to a bustling, thriving and ethnically diverse suburban neighborhood. Hillery T. Broadous first rose to prominence in 1955 as the founder of Pacoima’s Calvary Baptist Church. He soon after became involved in community affairs, spearheading fundraising for Hubert Humphry Memorial Park, and was crucial in the organizing of the San Fernando Valley Chapter of the NAACP which helped to break down housing barriers in the valley.

“The Broadous name remains a symbol of giving for the San Fernando Valley, and all of Los Angeles County,” said Los Angeles City Councilman Richard Alarcón. “The Broadous family has cut across all sectors of the community, including business and social justice issues,” Alarcón added. “I think it’s extremely important to document that history, not only of the prominence of Latino and African-American communities in the San Fernando Valley, but also how Hillery represents the foundation of this community.”

Principal artist, Juan Pablo Reyes aka JP Murals depicts the coming together of the San Fernando’s various ethnic communities with the image of an African American boy walking to school as well as a Mexican American girl opening a jar filled with imagination that spills over onto the rest of the mural. These two images showcase the need for representation and the coming together of Black and Brown youth to improve our community through education.

Other aspects of Pacoima’s history are included in the mural; from orange groves, to the Pacoima rock that sits in front of City Hall, to references of the tragic plane crash that took Ritchie Valens. The students of Broadus Elementary suggested the inclusion of various aspects of the STEAM (Science Technology Engineering Art Mechanics) Program with an image of the Space Shuttle and of course insisted on the inclusion of a stylized bronco, the school mascot.

The mural is a tribute to Hillery T. Broadous and the entire Broadous family who transformed the Valley — especially Pacoima — into a place of unity and inclusion.