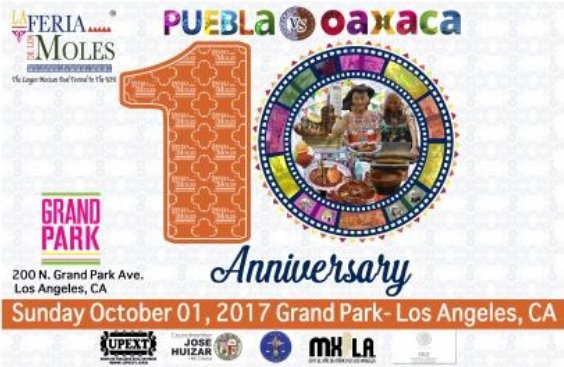 Posted at 01:20h in Media by Jackie Serrano 0 Comments
0 Likes
Share
Annual Largest Mexican Food Festival in the U.S.
October 1st, 2017 at Grand Park– #DTLA
Follow us #LaFeriaDeLosMoles2017
Vesper Public Relations- Los Angeles – August 2017– The most important cultural event in Los Angeles, celebrates its 10th Year Anniversary of ‘La Feria de Los Moles’ (Mole Fair). 10 years of flavor, 10 years of  culture and tradition, and now ‘La Feria de Los Moles’ brings more flavor and delicious mole in 2017.
Puebla & Oaxaca set to descend on Sunday October 1, 2017 at its new location Grand Park in the heart of Los Angeles.
This delicious event includes a special presentation on the origin of the famous mole, a delicious and fun gastronomic debate amongst representatives from Puebla & Oaxaca (Mexican states known for their mole), and  tastings of the different mole styles for all in attendance. Judge for yourself all the moles to decide which you like the best.
On October 1st, at Grand Park will, for the first time, host this celebratory feast filled with flavor and featuring an array of delicious moles that go from sweet to salty and hot. This year an array of delicious pastries and other dishes will be prepared right along with mole. It’s another first, and expected to be a unique star of the event.
You are invited to join a flavorful event offering more than 13 different Mexican moles to enjoy and bringing together a record attendance of over 30,000 people of all ages, generations and cultures.
The delicious event starts at 10:00 am. and lasts until 7:00 pm. taking place at Grand Park. Entrance is free and the traditional food is available for purchase.
Pulitzer Prize-winning Los Angeles Times food critic Jonathan Gold speaks about Feria de Los Moles (2012):
https://www.youtube.com/watch?feature=player_embedded&v=MkJfW0AWUMc
Visit: • http://feriadelosmoles.com/
•Follow: Twitter@feriadelosmoles
•Facebook: Feria de Los Moles
•Click here to listen to interview by PRI/The World (BBC)
http://www.theworld.org/?s=Feria+del+Mole
La Feria de Los Moles’ goal is not only to showcase the delicious Mexican cuisine, a tradition- recognized by the UNESCO world patrimony. The fair was founded by Pedro Ramos ˜Union de Poblanos En El Exterior (UPEXT), an organization recognized with a Proclamation from the City of Los Angeles recognizing its efforts in support of  education, health and issues that affect the Latino community in the city.
HISTORY OF MOLE
Mole is a dish that originated from the collision of indigenous and Spanish cultures in Mexico. Legend chronicals the discovery of the tomato, cocoa, vanilla and condiments, that are part of most mole recipes.
Also the ancient Nahuatl name molli was an important dish of salsa. Most of the mole ingredients come from Mexico and involve an important and ancient utensil, the metate, made of stone and used to chop and mix all of these condiments for molli. Because of the use of this pre-Columbian utensil, we can say that mole has an important role in the culinary history of Mexico.
Later on, during the colonial era more ingredients were added to the indigenous mulli, ingredients such as cinnamon, clove, pepper and almond. In Puebla this combination was named mole poblano, a dish combining culinary elements of indigenous and Spanish ancestry.
Although Puebla documented the first state of the mole dish, there’s no certain origin, but the legend is well known, and it tells that Mother Andrea de la Asuncion, from Santa Rosa Convent in Puebla, presented the first mole thanks to a divine wind that dropped all these different condiments to the pot where she was preparing this mole for the sympathy of Viceroy Tomas Antonio de la Cerda y Aragon, Marques de La Laguna.
While Oaxaca is a state of major variety of moles where 7 different dishes exists in the Mexican Republic: Negro (black), rojo (red), coloradito (colored), mancha manteles (table cloth stained), verde (green), Amarillo (yellow) and chichilo.