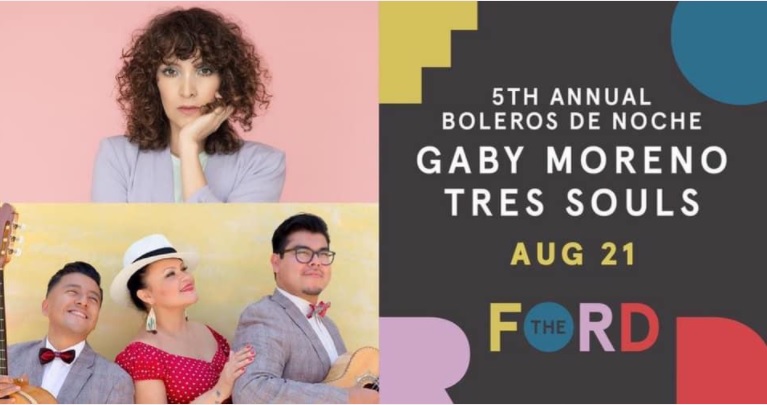 Gaby Moreno crafts expertly written songs in genres from blues, jazz, soul, and R&B all sung in four different languages. Her critically acclaimed album ¡Spangled! brought her together with legendary musician and arranger Van Dyke Parks to celebrate the migration of songs, like the bolero, across the Americas, and she offers her soulful voice to singing classic boleros at The Ford. Local favorite trio Tres Souls, led by vocalist Rocio Libertad, will open the night singing classics like “Sabor A Mi,” “Piel Canela,” “Historia De Un Amor,” and more.

Boleros De Noche is a musical and cultural experience, launched by Los Angeles cultural promoter Roberto Carlos, that seeks to preserve, uplift, and celebrate Latin American bolero music history in Los Angeles, and is quickly garnering multi-generational audiences who enjoy and partake in this musical experience. Now in its fifth year, the series is curated by its founder Roberto Carlos, a young Los Angeles-based artist/culture promoter who has committed his musical journey to bolero music and its traditions.

Since moving to Los Angeles from her native Guatemala, singer-songwriter-producer Gaby Moreno has released 5 albums, earned a Grammy nomination for her album, Illusion (Best Latin Pop Album, 2017), an Emmy nomination (for co-writing the “Parks & Recreation” theme song), and won a Latin Grammy (Best New Artist, 2013).  In 2006 she took the Grand Prize in the John Lennon Songwriting Contest, the first contestant in the Latin category to win Song of the Year (she’s now a judge). Gaby also sings the theme song and voices a character (Marlena) on the multi Emmy Award-winning Disney children’s television series, “Elena of Avalor,” which features Disney’s first Latina princess. Her moving version of “Cucurrucucú Paloma” was chosen to play at the end of the emotional  episode “God Bless America” for the last season of Netflix’ original show, “Orange Is The New Black.”

Tres Souls, comprised of members Roberto Carlos, Jesús Martínez, and Rocio Mendoza, represent a revival of trío romántico music. They relive the vintage sounds and songs of the 1940s -1960s bolero style that was popularized during the Golden Era of Mexican Cinema. Tres Souls create a festive and nostalgic celebration and offer their own unique interpretation of this timeless sound, interspersed with bilingual renditions, bridging the borders between their past and present. The released their first full-length album, Boleros Made in L.A., in 2019.

The Ford Theatre is a music venue in the Hollywood Hills neighborhood of Los Angeles, California. The 1,200-seat outdoor amphitheater is situated within the Cahuenga Pass within the Santa Monica Mountains. Located in a County regional park, the facility is owned by the LA PHIL and operated in partnership with the Ford Theatre Foundation and the Los Angeles County Department of Parks and Recreation. For sheer beauty and intimacy, it’s hard to beat The Ford for summer entertainment under the stars. Nestled in the Hollywood Hills, the open-air amphitheater is relatively intimate at just under 1,200 seats; no patron is more than 96 feet away from the stage.

For More Information about GABY MORENO:

For More Information about TRES SOULS: