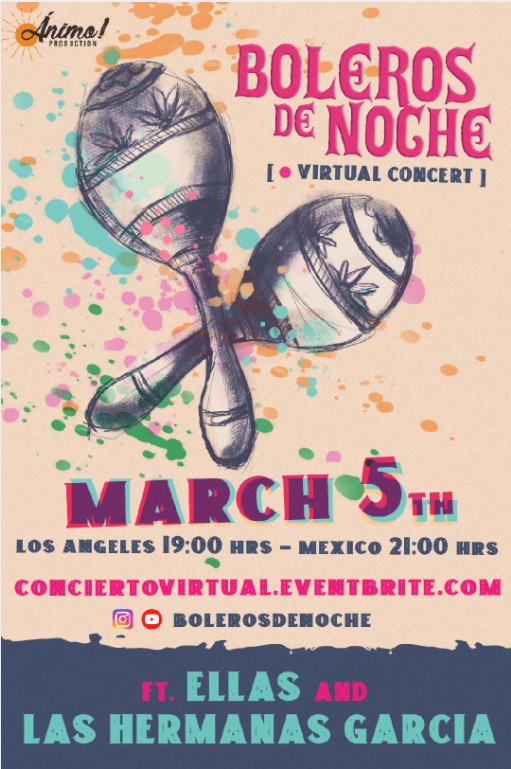 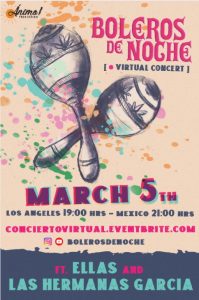 Vesper Public Relations. Los Angeles, CA ( February 2021)—Ánimo Production announces the first ever virtual Boleros De Noche concert. Boleros De Noche is a musical and cultural experience that seeks to preserve, uplift, and celebrate Latin American bolero music history in Los Angeles, and is quickly garnering multi-generational audiences who enjoy and partake in this musical experience. Now in its sixth year, the series is curated by its founder Roberto Carlos, a young Los Angeles-based artist/promotor who has committed his musical journey to bolero music and its traditions.

The first ever virtual Boleros De Noche concert will feature the rising Mexican duo Las Hermanas García who hail from la Costa Chica in Guerrero, Mexico and Los Angeles’ own Ellas, who mix traditional ranchera sounds with other contemporary genres. Each group will broadcast live from location.

Due to the current COVID-19 health crisis, organizers of the Boleros de Noche have decided to practice safe, social distancing by offering a live music program for the first time in a virtual format.

Early bird tickets are available for $13 dollars from now through Feb 7th. Tickets will be $17 afterwards.  To purchase tickets, please visit:  www.conciertovirtual.eventbrite.com

*After purchasing a ticket, attendees will receive a discount code to choose a dinner from 3 of our favorite restaurants:  Madre Restaurant, Chichen Itza, and Holbox. 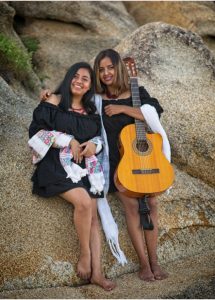 Celia and Laura Garcia of LAS HERMANAS GARCÍA hail from Ometepec Guerrero, Mexico where there is little to no access to recording studios, performance venues or music schools. Despite these odds, they have managed to have their boleros and chilenas heard around the world. The sisters have performed at prestigious venues in Mexico and Europe and have received millions of listens and views on YouTube and streaming platforms.

Laura and Celia began singing in public at a young age and were immersed in the old bolero love songs from their region for as long as they could remember classics from the 40s, 50s and 60s by the likes of Alvaro Carrillo and Indalecio Ramírez. Las Hermanas Garcia reflects the personality of the Costa Chica and their success is bringing a welcome optimism to the region.  Their songs ‘Que sepan todos’ & ‘Sabor A Mi’ sung in the ‘amuzgo’ language , native  idiom of their father have earned over 6 million streams on Spotify. 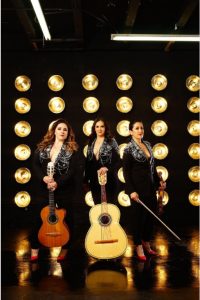 This triple threat from Los Angeles, California has been dazzling audiences around the world with their unique blend of mariachi and modern music. Simply with a guitar, guitarron, violin and their angelic harmonies, Ellas reached #7 on the iTunes Latin charts for their debut album Primerafila. The young trio is composed of Suemy Gonzalez (violin and vocals), a graduate of USC’s prestigious Thornton School of Music, Nelly Cortez (guitarron and vocals), a fourth-generation mariachi musician and recreational pilot, and Melinda Salcido (guitar and vocals), who has toured with the likes of Joan Sebastian and recorded with Marco Antonio Solis.

Suemy, Nelly and Melinda have also earned Grammy nominations and a Grammy award in their own musical careers. Ellas has performed at iconic venues such as the Hollywood Bowl, the Dolby Theater, and the “nest” for the opening ceremony of the 2008 Beijing Olympics. The mixture of their own musical upbringing along with some of their favorite musical genres such as gypsy jazz, pop and country inspires audiences, leaving them wanting more.

For More Information about ELLAS: