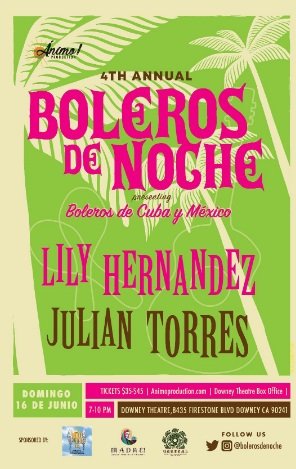 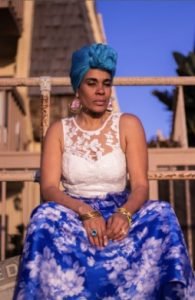 The second concert of this year’s series will also take place on Father’s Day.

Curated by its founder Roberto Carlos, a young Los Angeles-based artist/promoter who has committed his musical journey to bolero music and its traditions, Boleros De Noche is now in its fourth year. The second concert of 2019 is a celebration of boleros from Cuba and Mexico and will feature the Latin Grammy-nominated Cuban singer Lily Hernandez and the Mexican-American singer Julian Torres. Evoking the bohemian spirit of L.A., this magical summer evening will be filled with nostalgia and love.

The Latin Grammy-nominated singer Lily Hernandez, aka “La Amazona”, started singing over 15 years ago in her home country of Cuba. Although as a child she had a love for the art, she rarely sang in public because she was never given an opportunity. As an artist, she was ‘in the closet’ until Calixto Oviedo discovered her through her first EP. Since then, she has performed in jazz festivals in Spain, Austria, Germany, Switzerland, Finland, Norway, Denmark, Italy, and the U.S. as well as at important jazz clubs in Europe and the U.S. She was nominated for a Latin Grammy for her participation in an album with Raul Lara y Sus Soneros, and she has received praise for her salsa performances from Jerry Rivas and Ralph Irizarry, who named her “La Amazona De La Salsa”. In addition to boleros, she sings son, salsa, timba and bossa nova. Her charismatic personality and dynamic singing abilities are immediately felt by audiences.

Julian Torres was born in Hawthorne, CA to Mexican parents who instilled within him a love for Mexico’s music since he was in the womb. As a child, he was inspired to become a mariachi musician and began his career singing in community events and church carnivals. He has traveled and performed in many prestigious venues both in the U.S. and abroad, including: Carnegie Hall, the Hollywood Bowl, Teatro Metropolitan CDMX and for U.S. military troops overseas in Okinawa, Japan. His first EP, Epoca de Oro, is a tribute to his roots and mariachi heritage.

ABOUT THE DOWNEY THEATRE

The Downey Civic Theatre is a 738-seat venue located in the heart of downtown Downey. The Downey Theatre strives to bring the best entertainment and enhance the cultural and economic growth within the community.