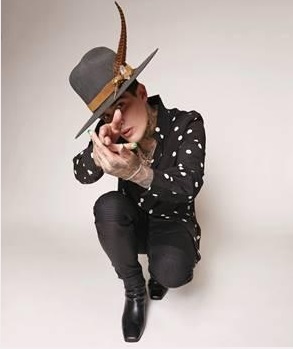 FOURTH SINGLE FROM HIS UPCOMING ALBUM

“Maldito” was written by Brandon Reyes y Elvin, who also performed on the track thanks to Adriel Favela’s efforts to showcase the new talents that are part of Esperanto Music Group in association with Fonovisa Records.

“Maldito” was produced by Adriel Favela as well as Danny Félix, “El Arquitecto Del Corrido Tumbado”. The song also comes with a music video that depicts dangerous scenes that could be fiction or reality in some neighborhoods.

“I think everything goes hand in hand with the song, from the cover art to the meaning behind the lyrics. It vividly showcases the reality of poverty, suffering, and hunger, all of which can be experienced anywhere in the world. I believe that seeing things head-on, gives us an opportunity to ultimately do away with these sources of suffering instead of simply ignoring them,” says Adriel Favela.

The limitless creativity of this young artist from San Francisco, California is clearly evident throughout the four singles he has released so far from his upcoming album: “El Bo”, “444 x Tipo Need For Speed”, “Lágrimas de miel” and “Maldito”. Each song has contributed to the momentum for the release of COSAS DEL DIABLO, which will surely please new and old fans alike.