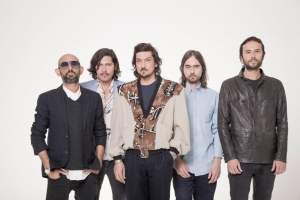 “Clarividad” is a brooding track that keeps in line with Zoé’s now classic sound. León Larregui’s proprietary delivery of lyrics, coupled with finely tuned synths and accented guitar riffs, hint that this may be yet another platinum-bound album for the Mexican quintet. (KCRW –Pan Caliente)

Vesper Public Relations. Los Angeles, CA. April 2018. – ZOÉ, the most important rock band on the Latin-American scene, is releasing “Clarividad” [Clarity], the latest single from the band’s sixth studio album, “AZTLAN,” to be released on April 20 along with an extensive tour through United States.

“Clarividad,” written by León Larregui and recorded at Panoram studios in Mexico City; mix arrangements by Craig Silvey and mastered by Greg Calb. The song is now available on all digital platforms.

The title of the album, Aztlán, is a reference to our people. It is an invitation to discover the beauty and richness of our culture, and look inward so we can recover that Mexican dignity and pride. This reflection to the past is with the hopes that as we reinvent ourselves in the near future we continue to maintain our ‘Mexicanness’ in a globalized world. This concept did not necessarily have direct impact on the sounds of the songs, it was more conceptual.”

Preceding this single were the songs “Temor y Temblor” [fear and tremble] and “Azul,” which immediately reached first place on the most viral and global charts in Mexico Spotify as well as in Latino Alternativo Chart iTunes in México.

Meanwhile the music video for “Azul” has more than 9 millions of views on all digital platforms, including YouTube.

“Clarividad, Zoe have managed to blend equal parts Gustavo Cerati, The Beatles, Roxy Music and the Cars to create a love soundscape for the world in desperate need of it.”