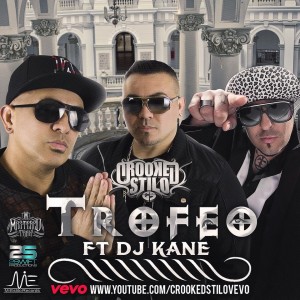 “Trofeo” is the second single project of this duet formed by brothers Víctor and Johnny López, best known as Crooked Stilo.

The association between the famous duet and DJ Kane, of the Kumbia Kings, arose thanks to the producer of “2 Swift”, Juan Zavala who knew DJ Kane during their stay and work together in Corpus Christi.

Crooked Stilo states that at the time that they were looking to the proper person to develop the song “mano a mano” with them. They thought of DJ Kane at first, knowing that he also likes cumbia. “We showed him the song with our idea and he liked it.  That same week he recorded the parts in Texas. Dj Kane definitely took the song to a new level”.

The song was born one night while working on the project when Juan Zavala started to play the guitar. That same night the incomparable duet wrote the chorus and the first verse of the melody. “The song tells about a woman in love with a man; however, for him, she is just another trophy”.

The famous duet explained that the video shows the woman getting ready to surprise her lover with a romantic dinner, but he lets her know that he has a meeting to attend. In reality he is having an affair with another woman who is another trophy in his collection.

The song was produced by Juan Zavala, of “2 Swift Productions”; the composers of the song Víctor and Johnny López. The video was directed by Christian Gutierrez, “Concrete” of R2SFilms, and was filmed in downtown Los Angeles and at the “Azul” night club of Alhambra, California. 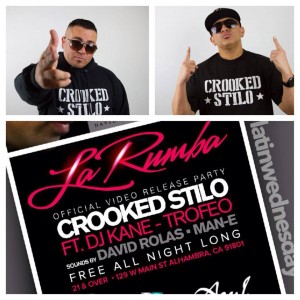 With a career span of more than 20 years and 9 successful productions Crooked Stilo reaffirms once again their presence in the urban genre, which is the result of their arduous work and consistence.

The brothers Víctor and Johnny López since early childhood have lived with the effects of the civil war in their home country of El Salvador. Their family immigrated to the United States where they would form the famous duet.

Historically Hip Hop has been a genre that uses ‘samples’ (taking sounds of an old albums), in the case of Crooked Stilo they say it was their father’s record collection that was 100% cumbia, that influenced them and gave them their identity. “What we wanted was always in front of us; in this case we welcomed it”.